The Little Eclipse Concept Jet That Almost Was 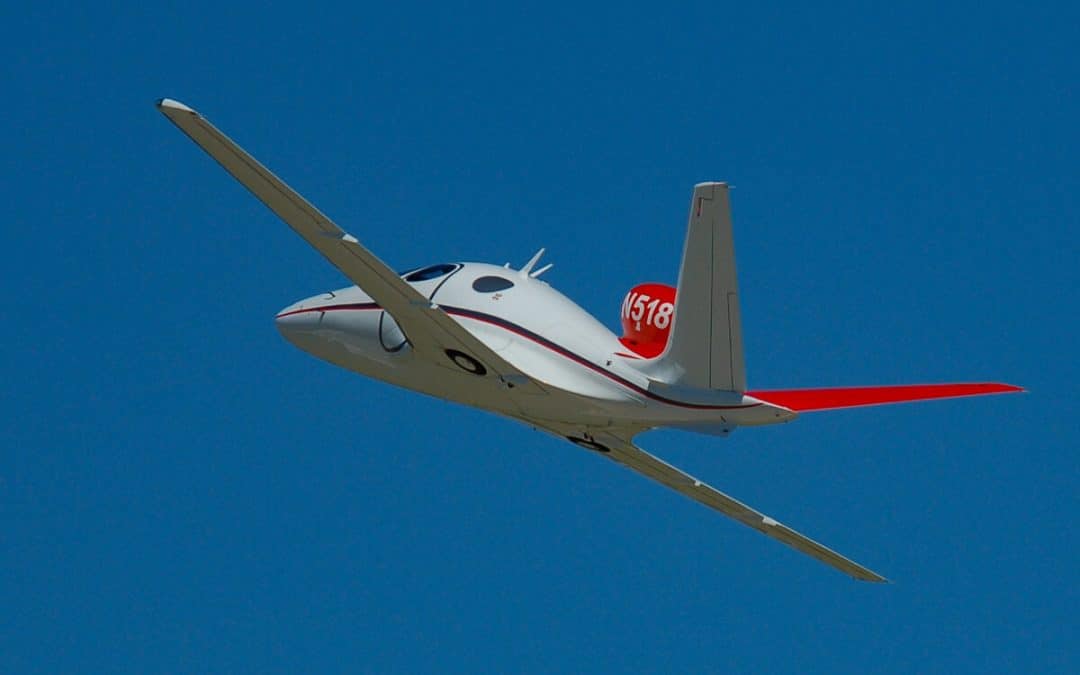 At first glance, it bears a strong resemblance to the Cirrus SF50 Vision Jet. A sleek, low-wing, V-tail jet with a single engine mounted in a dorsal pod, the two aircraft share the same layout and look nearly identical. But in fact, the aircraft pictured is the sole Eclipse 400, and flew a full year before the Vision Jet’s maiden flight.

Initially known as the Eclipse Concept Jet, or ECJ, the 4,700-pound jet was intended to gauge market interest for a compact, four-place “personal jet,” and would have complemented Eclipse’s primary offering—the larger, six-place Eclipse 500. With their hands full with Eclipse 500 production, the company turned to a firm called Swift Engineering to engineer and build the smaller 400.

On one hand, the project was relatively straightforward, at least compared to a clean-sheet design. Swift would begin with a standard Eclipse 500, shrinking the cabin, redesigning everything aft of the wing, and maintaining 60 percent commonality with the existing jet. But on the other hand, the deadline was extremely tight, and the project would have to be completed in record time.

Using NASA’s secure Wallops Island facility on the Virginia coastline, the team got to work. Only 200 days later, the Concept Jet flew for the first time. Three weeks after the first flight, it flew to Oshkosh, Wisconsin, to be unveiled at EAA AirVenture 2007.

The jet is prepped for its unveiling in the Baysis hangar at the Wallops Island flight facility in Virginia, July 2007. [Courtesy: Swift Engineering]

During the unveiling, Eclipse founder Vern Raburn announced that the $1.35 million aircraft ($1.8 million today) would initially be made available only to existing Eclipse 500 customers. He touted the jet’s efficiency, claiming a fuel burn of 45.5 gph at 350 knots. For comparison, Daher’s six-place TBM 960 turboprop will burn 57 gph at 308 knots, and the seven-place Cirrus SF50 Vision Jet burns around 65 gph at 300 knots.

The design similarities between the Cirrus and the Eclipse were perhaps more a function of convergent design as opposed to inspiration. Faced with the requirement to develop a single-engine jet, there are only so many places to position the engine, and every option naturally requires placement along the centerline of the fuselage. Because internal volume was a priority, it would have made little sense to stuff the fuselage full of engine and intake ducting. And in the interest of utilizing smaller and lighter landing gear, there would have been no space for a ventral engine slung beneath the belly.

A dorsal engine mounted atop the fuselage, therefore, was the only remaining option. There were multiple ways to keep the tail surfaces clear of the hot engine exhaust, including a H-tail or a Skymaster-esque twin-boom arrangement. Ultimately, both Cirrus and Eclipse/Swift found the V-tail configuration solved the problem in the lightest and most elegant manner. Looking at the two side-by-side, it becomes evident that the smaller, sleeker Eclipse is the sports sedan equivalent, and the larger, bulkier Cirrus is the SUV, complete with a third row of seats.

Despite garnering substantial interest and reportedly attracting nearly 100 deposits in the year following its unveiling, the Eclipse 400 program would progress no further. Eclipse’s business and financial woes would prove to become insurmountable, and bankruptcy, liquidation, and restructuring would relegate the sleek V-tail jet to a quiet corner of an Albuquerque hangar.

The Eclipse 400 as seen in early 2022, stored in a hangar and unflown for over a decade. [Courtesy: Philip Paiz]

There it remains to this day. Some parts have been taken from it to keep Eclipse 500s flying, but it is otherwise intact and could theoretically fly again one day. Given the realities of economics and liability, however, this seems unlikely.

The current state of the 400’s cockpit, missing trim and utilizing a traditional thrust lever—a departure from the palm-sided dial that was initially installed as a novel means of thrust control. [Courtesy: Philip Paiz]

Whatever its ultimate fate, one hopes it won’t be dumped at a scrapper and destroyed. With any luck, it will eventually be donated to a museum, where future generations can appreciate it for what it is—a striking example of clever engineering and huge optimism for a market that wasn’t quite there at the time.

The post The Little Eclipse Concept Jet That Almost Was appeared first on FLYING Magazine.