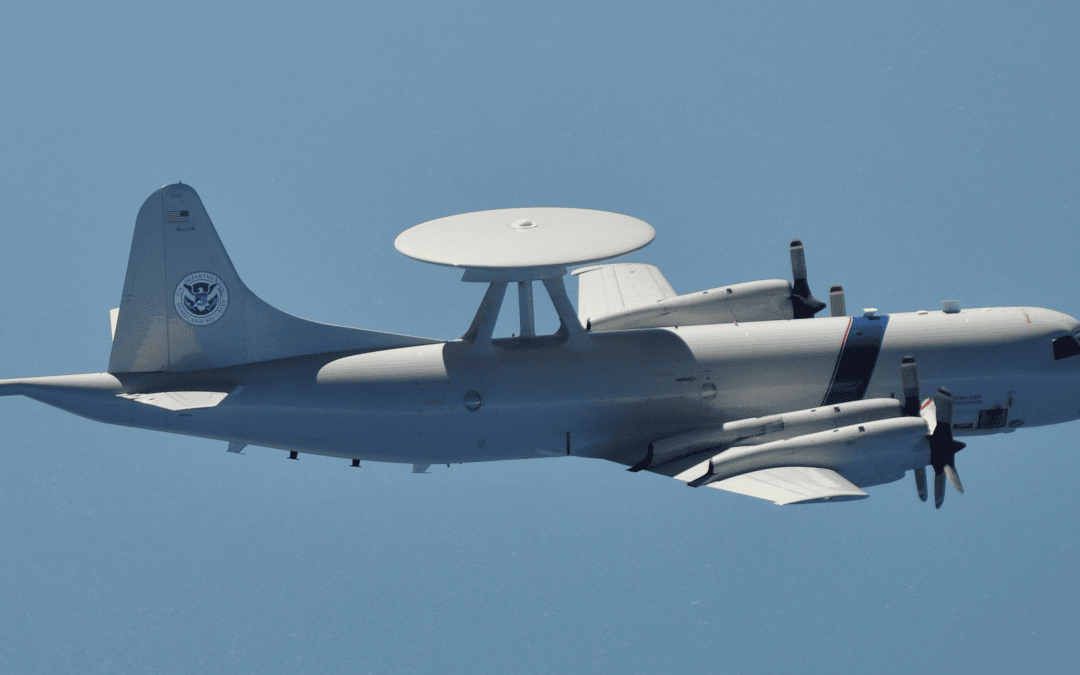 The Air and Marine Operations (AMO),an operational unit of the U.S. Customs and Border Protection (CBP) agency, is helping keep illegal drugs off the streets. The AMO reported at the end of August that, through just three fiscal quarters of 2022, it worked with its federal and international partners to seize 121,667 pounds of cocaine and 33,226 pounds of marijuana in international waters. That’s an estimated $2.4 billion in illegal transactions the agency said it’s blocked.

The AMO’s efforts were successful in large part because of its aviation and maritime law enforcement expertise, equipment, and intelligence. The unit has 1,800 federal agents and mission support personnel, 240 aircraft, and hundreds of marine vessels that operate throughout the United States, Puerto Rico, and the U.S. Virgin Islands, making the AMO the largest aviation and maritime law enforcement agency.

A ground crew prepares a P-3 for its next flight. [Courtesy: The U.S. Customs and Border Protection/Photo by Ozzy Trevino]

The P-3 is useful for air and marine operations because of its vast capabilities, especially for missions requiring extended overhead or airborne time that can last over 10 hours. In fact, according to Lockheed, the P-3 Orion has a certificated maximum endurance of 16 hours, but the CBP lists its variants as having a max endurance of 12 hours and a range of 4,000 nm. The aircraft is also known for its hemispheric range and its ability to operate in all weather and environmental conditions. This is a testament to why the National Oceanic and Atmospheric Administration (NOAA) also used a variant of the aircraft, the WP-3D Orion, for hurricane hunting.

CBP says typically, its P-3 Airborne Early Warning (AEW) aircraft fly in tandem with the P-3 Long Range Tracker (LRT), where the P -3 AEW detects and tracks multiple targets, and the accompanying P-3 LRT intercepts, identifies, and tracks those targets. Pilots of the agency’s P-3s are referred to as interdiction agents and are a lesser known but highly sought-after pilot pathway. The crew usually consists of eight personnel: the pilot, copilot, flight engineer, and radar/sensor operators.

A P-3 crew coordinates flying operations from the airplane’s cockpit. [Courtesy: The U.S. Customs and Border Protection/Photo by Ozzy Trevino]

To coordinate these operations, the AMO operates two P-3 National Air Security Operations Centers in Jacksonville, Florida, and Corpus Christi, Texas. Aircraft at the bases spread across North, Central, and South America borders to prevent drug smugglers or traffickers by using their long-range radar capabilities at known points where criminals are prone to penetrate the border. The CBP also said interagency cooperation is vital to capturing smugglers. For example, it said earlier this March that one of the P-3 aircraft from the Corpus Christi base detected a “suspect vessel near Panama City.” CBP noted that the aircrew notified international partners’ law agencies to intercept the vessel and seized 4,998 pounds of cocaine.

A radar operator works out of the back of a P-3. [Courtesy: The U.S. Customs and Border Protection/Photo by Ozzy Trevino]

The agencies have also been watching for the smuggling of fentanyl by the cartel. The AMO dashboard shows that the 1,108 pounds of fentanyl confiscated this year outruns the 786 pounds retrieved in all of 2021. Fentanyl is a synthetic opioid that is 50 times stronger than heroin and 100 times stronger than morphine, according to the Drug Enforcement Administration (DEA).

On a typical day, the CBP says it conducts 74 Air and marine operations. The agency needs qualified pilots to do this work. To boost its recruitment efforts, the agency will hold a virtual Fall Career Expo on Tuesday, September 13, and is looking for entry-level and experienced law enforcement professionals, including pilots. In a statement, Assistant Commissioner of Human Resources Management Andrea Bright said, “CBP and law enforcement agencies across the country are facing unprecedented challenges in hiring and recruiting.” She said CBP would offer special salary rates for its  Air Interdiction Agents (Pilots).

The post The P-3 Orion Helps the Feds Seize Over 77 Tons of Illegal Drugs appeared first on FLYING Magazine.