This West Virginia Fly-in Destination Has a Higher Calling 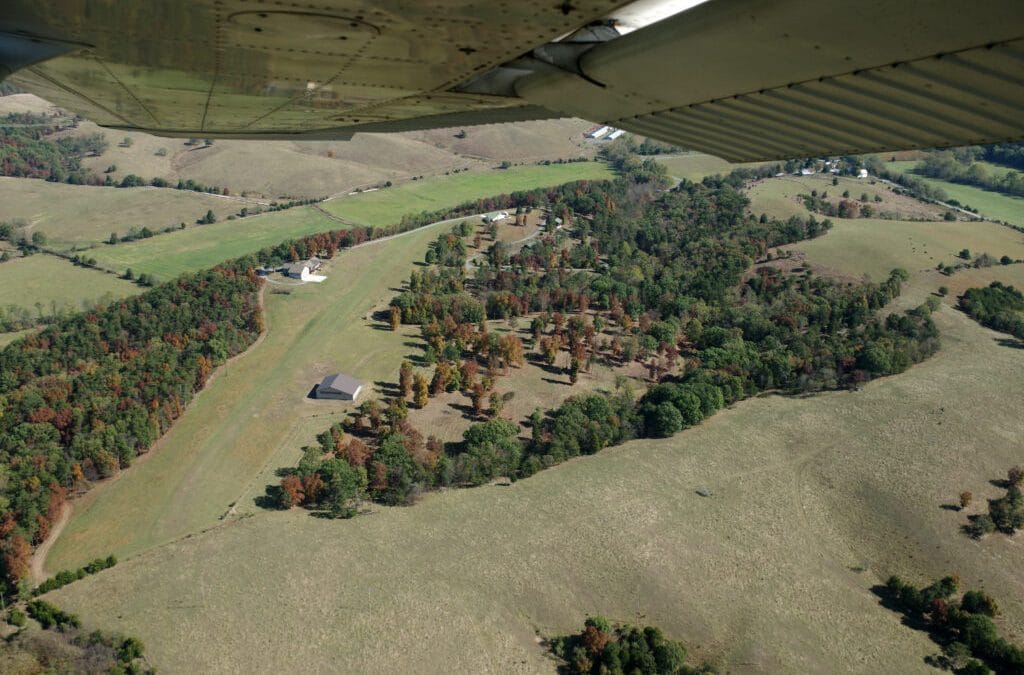 Largely, general aviation can be seen as the gateway to personal enjoyment and fulfillment, whether it be in the form of affording people the opportunity to try new things, meet new people, show their love for flying, or anything else. And our aircraft are the vestibules by which we often seek out these experiences.

Quite a number of aerial adventures start and end at privately owned grass airstrips. These places dot the country and come in varying forms with differing origin stories and histories.

Heaven’s Landing Airstrip (4WV4) in Medley, West Virginia, is a fly-in destination that was created with a higher purpose in mind.

The turf runway is the center point of Just Plane Adventures’ offerings, which include:

The airstrip has welcomed visitors (with prior permission) for more than two decades. The business’ origination was the byproduct of the Penningtons’ shared passions. Mitch Pennington, who owns the airstrip along with his wife Teresa, says their efforts to build Heaven’s Landing Retreat have been personally rewarding.

“First and foremost, our hearts are in ministry,” Mitch says. “We have been fostering Christian retreats in an aviation setting since around 1996. Just Plane Adventures was founded as the for-profit arm of Visions Beyond Ministries, to help fund its operations of helping people find a vision beyond their own circumstances through a relationship with Jesus.”

In the subsequent years, the couple has hosted thousands at the appropriately named Heaven’s Landing Airstrip. These fly-in visitors have come for a variety of faith-focused conferences, marriage seminars, and for a few days away from their daily lives in a peaceful setting easily accessible by airplane.

With such a diverse customer base, it’s not surprising that a unique array of aircraft have landed there over the years. But one type of traffic has been most common at Heaven’s Landing Airstrip: conventional-gear aircraft.

“We have had Cessna 206s, Quest Kodiaks, Cessna 182s, Piper Cherokee 180s, Grumman Tigers, and lots of other similar aircraft,” Mitch says. “We have also had all the taildraggers that you can think of.”

“My airplane, though, is probably one of the largest that has flown into Heaven’s Landing Airstrip, in terms of takeoff distance.”

One of the business’ key differentiators from other fly-in destinations in the area is the hangar space it has. Between the three hangars that surround the airfield, there’s room for about five standard single-engine piston general aviation aircraft to be kept out of the elements.

One of these buildings also doubles as a venue, accommodating anything from weddings to corporate retreats, with the top floor being able to comfortably shelter 70 patrons.

Prior to the Penningtons starting their business venture, though, the airstrip was nothing more than wooded farmland.

“Everything that is a part of our footprint was pioneered from scratch by us,” Mitch says. “We added roads, water connections, and electric hookups all by ourselves.

“In 1996, we purchased a 60-acre tract of land from my wife’s parents with the intent of turning it into a runway. Luckily, my dad had recently retired as a heavy machinery operator and he spent around a month [clearing and other obstructions] with a D8 dozer with a ripper. Then a grader was used the next year to smooth it all out.”

‘…It’s Not an Airport for Greenhorns’

While the airstrip is well-graded and maintained, it still can be a challenging operating environment for those without experience flying into it. Mitch, who is a 16,000-hour former commercial freight and business jet pilot, unsurprisingly has the most experience at his own airstrip.

He routinely provides primary and recurrent training. As a preface to these flights, he is careful to advise students and visitors alike with an upfront caveat about the potential challenges of flying at the airport. The lone runway sits on a plateau between two mountain ranges, which are each about 3,000 ft and 4,000 ft high, respectively.

“So, I tell people it’s not an airport for greenhorns,” he says. “The airstrip is one way in, one way out, with Runway 24 being used for landings and 6 for takeoffs. At the end of Runway 6, there is about a 400 ft drop-off to an 800 ft valley below. Between the two ends, there is a 60 ft difference and a 3 percent grade.”

Mitch concedes that practice helps to rectify challenges that first timers may have at the airstrip.

“Having said that, I trained someone last summer, who got their private pilot certificate in 41 hours,” he says. “He did all of his training from here [4WV4]. It’s just what you are familiar with. For example, there are airline pilots who haven’t ever landed on grass. It just takes some getting used to.”

In line with the Pennington’s efforts in their own personal ministry, they have supported and hosted a number of Christian aviation groups over the years. Many of these are missionary flight organizations, who serve others across the world by utilizing fixed-wing aircraft.

Often, these groups’ work is conducted in the most austere corners of the Earth, so pilots are routinely challenged by their operating environments. But rigorous training helps to assuage the realities of flying in remote, inaccessible places that are flanked by inhospitable terrain.

Since its completion, several of these organizations and mission-specific training providers have included Heaven’s Landing Airstrip as a training ground to better prepare pilots for future challenges.“Among others at certain times, the School of Missionary Aviation Technology comes to us for a few days each year when they are ready to do their mountain and short field flying, usually around May,” Mitch says.

Some of the flying techniques and skills that this and other groups practice at 4WV4 include:

The post This West Virginia Fly-in Destination Has a Higher Calling appeared first on FLYING Magazine.