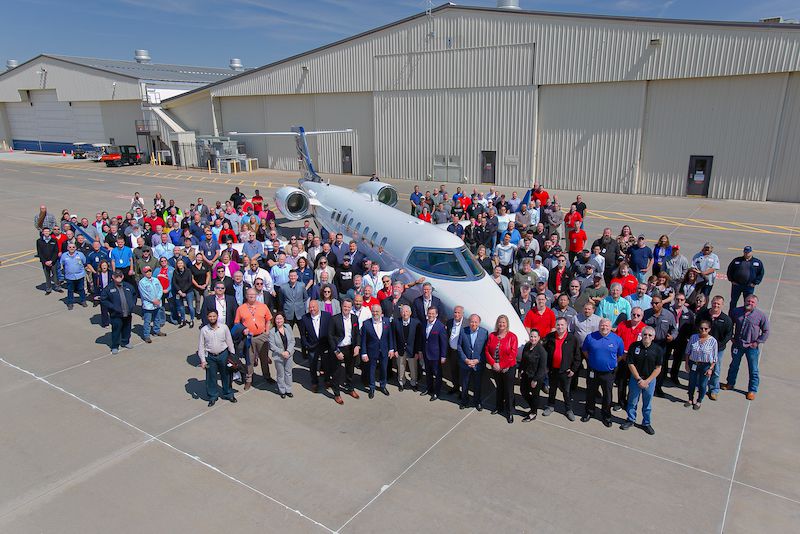 It breaks my heart to hear that the last Learjet just rolled off the line.

I was the Director of Manufacturing Control Systems from 1984 to 1985. It was my job to implement a new manufacturing control system. I remember getting frustrated trying to convince the VP of Manufacturing that the new system would help him. To get my Mojo back, I would go out to the flight line and sit in the cockpit of a completed Lear 35. 20 minutes later I would come back in pumped up and ready to get the job done. I loved flying back and forth between my two implementation teams in Tucson and Wichita on the corporate Lear 35 shuttle.

At that time, the President, Bib Stillwell, had over-produced to the point where we had over 60 green airplanes in stock. In order to keep the optics in check, the unsold airplanes were spread out to little airports all over the country. It broke my heart to have to lay off my team and myself and to watch the VP I was working for lay himself off. I watched as employee after employee refused severance packages knowing that they would get none just so they could work for the company a little while longer. Shortly after I left, Bombardier bought the company. When I went to Tucson to get my retirement money, the vibes were not the same.

Still to this day, I wonder whatever happened to Pratt and Lambert, the two cats that lived at the paint shop. On their collars were quarter sized official Learjet ID badges with the title “Rat Cat”.

Those of us who traveled the adventurous life of aviation careers (mine being some 53 years) have a lot to owe the dreamers, idea generators, makers, users, successors, and failures – plus, I must admit, regulators, who all did their part in creating the evolution of manned flight.

Risk-takers of the likes of Bill Lear and so many more, contributed their lives, loves, treasures, and passion to the unstable, high risk, and always exciting businesses through fear, anxiety, courage, joy, boredom, excitement, sadness, and persistence. They were leaders, some good, some great, some tyrants, but all with strong willed goals in mind.

I am both sad and happy to see the final milestone of the Learjet idea of Bill Lear. God bless him and all those who climbed aboard his dream. I wish those who were in the final picture well in the continuation of the best career choice one could make, in my estimation.

Thought About A Helmet For Flying? Maybe You Should

I flew helicopters in the military for 20+ years, rode a motorcycle for nearly the same duration. The helmet was one of the factors that saved my life in a helicopter crash many years ago. Yes, it is a little inconvenient, but the consequences of not wearing one can be of a greater concern. The second greatest benefit is the huge improvement in communications over the $0.50 speaker that seems to be installed in most of the civil aircraft that I flew. If I were still flying, I would have no reservations about wearing a helmet. Over the years in the US Army, we received several comprehensive safety briefings on helmet design and safety considerations, i.e. design, impact resistance, G – loads imposed on the cervical spine, the effect of helmet mounted vision augmentation systems, etc. I wonder where those studies are today? They could be persuasive for the non-helmet wearers? I bet NASCAR has some interesting information on helmet safety, too. We take a lot for granted when we fly, our invincibility shouldn’t be one of them. Just another old opinion.

Flying banners I always wore a helmet. I spent all day over water at 350′. If the engine quit, I was going to get wet. Water landings can be rough and there is whole bunch of steel right near your head in a Supercub. Unconscious in a sinking airplane was not a place I wanted to be so I wore a helmet for that gig.

Good video. I think it very much does depend on the type of flying one does, as to whether a helmet should be used. No one wears a helmet in their cars, but drivers who take factory-stock cars on a race track do wear helmets. Exact same vehicle, but different circumstances that warrant the extra safety. The same is/should be true in aviation.

As a GA CFI, I recommended landing practices, using none, as little, or as much flaps as needed-depending on winds, aircraft, and fuel level in tanks as in some aircraft fuel may shift away from intake ports on prolonged slips causing fuel starvation. Read manual.

Also, I explained and included landing practices with no flaps in case any of the electric flap system components (relays, motors, switches) fail to activate them. Some Cirrus pilots never or seldom do this, and when components fail, they find themselves wondering, landing faster and using more runway to a full-stop than expected. I learned this one by experience.

It has been my experience that in the Cessna 100 series and similar designs, full rudder slips with full flaps may disrupt airflow to the horizontal stabilizer causing a significant tail downforce reduction (lift) allowing for the tail to suddenly come up, and the nose to go down. I have tried several full flap, full rudder simulated approaches to a landing, out of 4000 ft, in a C172H, and encountered this tail up stall effect with a 400 ft loss on recovery. The control vibrations will tell you to let go of the slip, level wings, apply power, and go around if so.

Not possible with fuel cost.Maybe. Driving across country and MIGHT get there in time.Too early.I prefer clouds and work.Sun ‘n Fun isn’t on my list to do – ever. Not sure why.No, I gave it some thought but finally decided not to.I have no plans to ever attend SnF. Too many people.Nope. Alaska Airmen’s Show.On social security. Admissions and parking too expensive for me. I would like to go but sadly I can’t afford it.Never going back.Will be in Dayton, Ohio on business. Will visit the AF Museum.Government priced me out of the sky. Had to sale my aircraft. I sure cannot afford Sun & Fun after the city of Lakeland took over the show.Nope, don’t go there any longer.I will never go back after the way I (and others) were abused following the tornado.They have turned against homebuilts and I am never going there again.Never really has been in my plans.It’s in Florida, hell no I won’t go.What is Sun ‘n Fun?