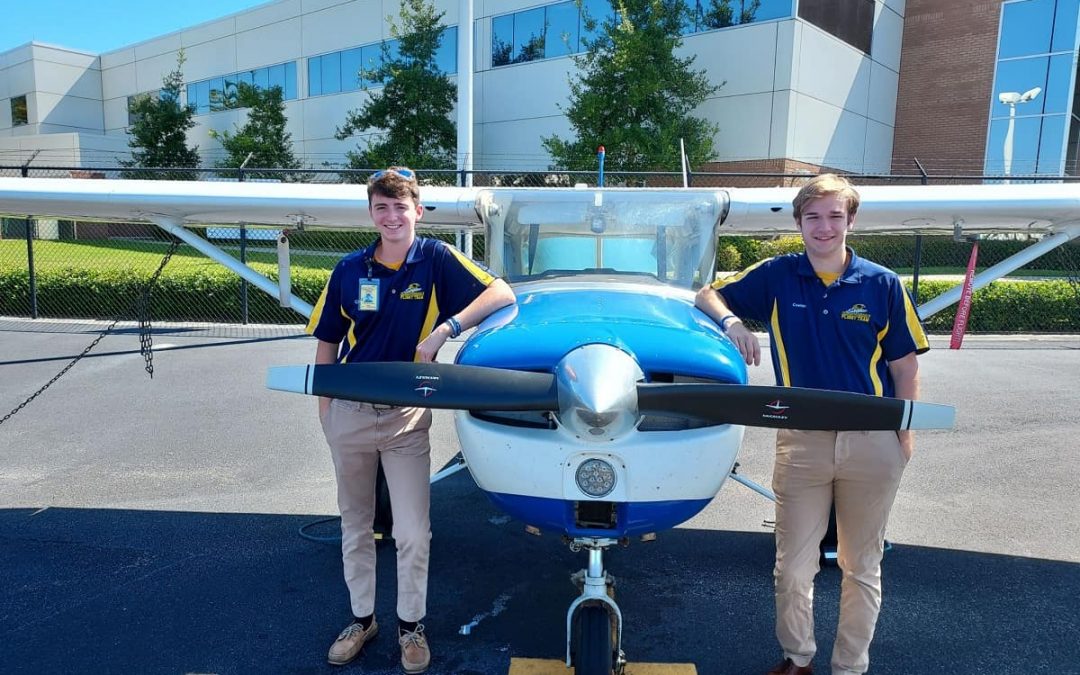 Connor Cvetan, a junior at the school, and his senior flight instructor, Chris Shields, were practicing pattern work near Palatka, Florida, last Monday and found themselves in the unique situation when they heard a distress call come through their coms.

They noticed an ADS-B target on their iPad about 3 miles out pointed at the airport. They then heard Jim Goolsby, a retired airline pilot flying an experimental aircraft, on the radio reporting engine failure.

“I knew it wasn’t a simulated engine failure by the way he phrased it; it was an actual engine failure” Cvetan said. “But he was only at 900 feet and 3 miles from the airport—I knew he wasn’t going to make it.”

Shields was shocked by the call but knew an engine failure could be severe.

“It was shocking and uncommon, not something you see everyday. But after the shock, I understood it was a severe distress call,” he said.

This is when Cvetan and Shields decided to depart the pattern and head in the direction of the pilot. After Goolsby noted he was nowhere near safe fields to land in, Cvetan advised Goolsby that his best chance was to land in a nearby retention pond, Goolsby agreed.

Shields assured Goolsby he would call for help.

“When he said he had to land in the pond, we let him know we would call emergency services,” Shields said.

When Goolsby touched down in the pond, Cvetan’s heart sank,

“We were three miles south of him when he hit the water,” he said. “My first thought was, ‘Please don’t be unconscious,’ in case the plane sank.” Cvetan wasn’t sure how deep the pond was.

After the water landing, Cvetan and Shields jumped into action. They radioed the guard to see if anyone was in the area and explained the situation.

A Navy helicopter pilot in the area received the coordinates from Cvetan.

While they waited for help to arrive, they flew overhead to try to see if Goolsby was OK.

“We had 10 gallons left in our Cessna C150, so we stayed until someone was able to reach him,” Cvetan said.

Connor was relieved to see Goolsby standing atop his aircraft, half submerged in water.

Retention pond employees saw the incident and were able to reach Goolsby. It was at this point, Cvetan and Shields headed back to refuel.

After arriving at the pond, the Navy helicopter lowered a bucket to retrieve Goolsby and carry him safely back to the airport.

At the airport, Cvetan saw ambulances arrive shortly before the helicopter made a safe landing.

“When the ambulance didn’t move right away we knew he wasn’t harmed,“ he said.

Much to the relief of everyone involved, Goolsby escaped with no serious injuries. He doesn’t plan on letting this incident stop him from flying in the future.

Seeing an incident in the past may have prepared Cvetan.

“I had seen an incident before, so it wasn’t the most unfamiliar thing, so that helped me stay calm,” he said.

Shields mentioned that while this is the second time he witnessed an aircraft incident, the two were very different.

“The one at Massey Ranch was pilot error, but this was different; the pilot lost an engine, he wasn’t at fault.”

Shields gives the credit of staying calm to the training he received at Embry-Riddle. Students train in extremely realistic simulators where they practice what to do in case of an emergency. In the multiengine course, a lot of in-flight training focuses on one-engine procedures and preparing for the possibility of losing an engine.

“Embry-Riddle focuses on the emergency procedures to prepare for the real world,” Shields said.