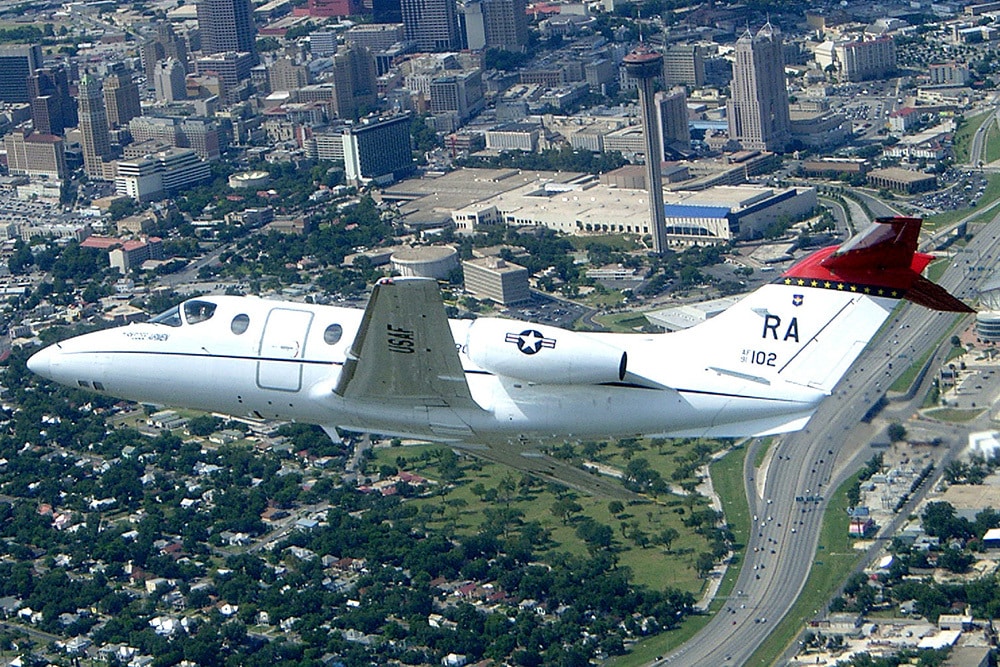 The U.S. Air Force has integrated hundreds of immersive training devices that allow physical and visual interaction with flight controls and avionics into its pilot training system as it prepares to divest its fleet of aging T-1A Jayhawk training aircraft.

More than 200 immersive training devices (ITDs) have been delivered throughout the Air Force pilot training system, according to an Air Force Air Education and Training Command spokesperson.

Earlier this week at EAA AirVenture 2022, Redbird announced that the U.S. Air Force became the latest service branch to utilize civilian flight simulation products to train its budding pilots. Redbird delivered a prototype to the Air Force in March, and the service now plans to adopt the aviation training devices (AATDs) as a core part of its initial training plan, the company said.

The move to integrate Redbird AATDs into training follows a decision made in 2019 to divest the Air Force’s fleet of aging T-1A Jayhawk twin-engine jet trainers, said Air Force Capt. Lauren Woods, Air Education and Training Command spokesperson. The aircraft, which are a military version of the Beech 400A, were first introduced into service for student training in 1993, and are now “facing significant modernization bills,” Woods said.

“The USAF already uses simulators for T-1A training and elsewhere in aircrew training programs so the introduction of simulators is not a new concept,” Woods said. “These devices will help us prepare for the divestment of the T-1A aircraft and provide a full spectrum of simulation capabilities.”

The Air Force plans to begin divesting the T-1 fleet over the next year, by decommissioning the first 50 of its oldest and least-capable aircraft, with a plan to divest all aircraft by Fiscal 2025. T-1s used for Combat Systems Officer Training at Naval Air Station Pensacola would be retained, Woods added.

“The introduction of the T-1 Mid-Tier Device (MTD) based on the Redbird simulator platform is the first to incorporate a fully functional Mixed-Reality (MR) capability which allows crew members to physically and visually interact and monitor interaction with the flight controls, flight management system and avionics while flying in the virtual reality environment,” Woods said. “This training capitalizes on virtual reality while maintaining crew competencies and physical interaction.”

The service wants to strike a balance between training with simulators and virtual reality and live training in aircraft.

“Simulators are used throughout all areas of USAF pilot training,” Woods said. “Low-cost, virtual-reality based immersive training devices were developed to complement high-end simulation devices by giving students access to devices for all phases of training.”

The training devices can also offer a superior learning environment to that of an airplane, according to Redbird CEO Todd Willinger.

“The Air Force’s recognition, adoption, and advancement of that vision speak to the immense technological innovation in our industry and the capability of flight simulation to provide an effective means to train some of the top pilots in the world,” he said.