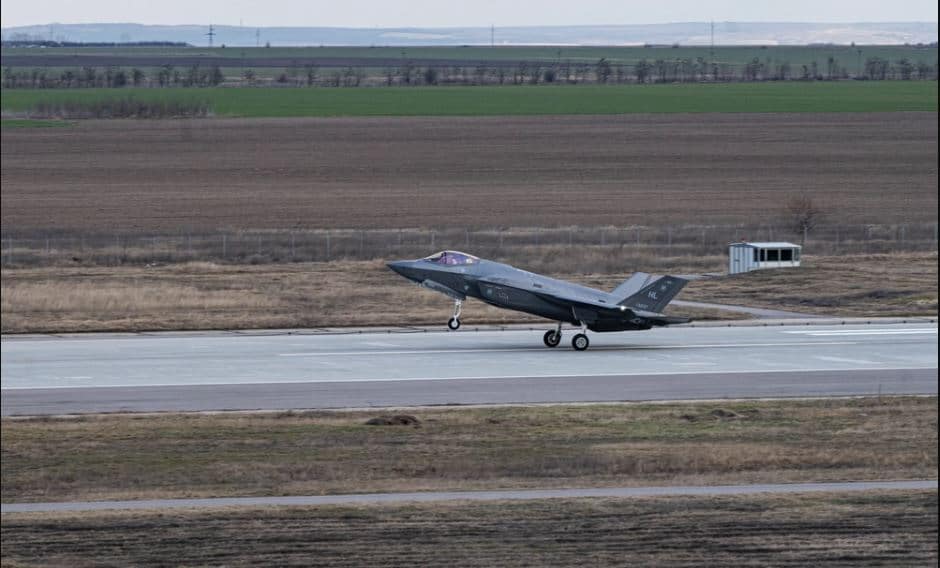 In the wake of a full-scale, violent invasion of Ukraine on Thursday, President Biden affirmed U.S. military support of NATO security as U.S. European-based ground and aviation forces mobilized throughout the Baltic Region.

Russian air and ground troops began their assault on dozens of strategic Ukrainian targets before dawn, along the way providing a window into the capability of Russia’s modern military forces, according to observers.

“Russian military has begun a brutal assault on the people of Ukraine, without provocation, without justification, without necessity,” Biden said Thursday afternoon. The invasion involved 175,000 Russian troops, the construction of a field hospital, and the prepositioning of blood supplies, he noted.

Russian forces advanced on Ukraine on three fronts, initially launching a barrage of about 100 intermediate-range, short-range, and cruise missiles from land, sea, and air platforms, according to a Department of Defense (DOD) report. The attacks included 75 fixed-wing, heavy and medium bombers, the DOD said.

In the beginning hours of the invasion, Russian airstrikes took aim at targets with strategic value, including Ukrainian airports and airfields, according to reports.

By mid-Thursday morning, Russia had targeted dozens of locations throughout the country, including Antonov International Airport (UKKM) northwest of capital city Kyiv, and Melitopol Air Base (UKDM) along the southern Ukrainian border with Crimea.

At Antonov International, a cargo airport owned by aircraft manufacturer Antonov, Ukrainian forces launched an artillery strike and shot down three of 34 Russian attack helicopters that were also accompanied by attack aircraft and fighter jets, according to a statement released by Ukraine’s Ministry of Internal Affairs. Following the attack, initial reports circulated that the Antonov AN-225 Mriya—the only operational copy of the world’s largest cargo airplane built during the Soviet era—was destroyed amid fighting. The claim, however, was reportedly refuted by an Antonov Airlines captain, who said on social media that while Russian Forces held the airport, the aircraft remained whole, Airlive Media reported.

READ MORE: What the Ukrainian Air Force Has in the Sky

“Peace in our continent has been shattered. We now have war in Europe, on a scale and of a type we thought belong to history,” NATO Secretary General Jens Stoltenberg said Thursday following a North Atlantic Council meeting. “NATO’s core task is to protect and defend all allies. There must be no room for miscalculation or misunderstanding. An attack on one will be regarded as an attack on all. This is our collective security guarantee.”

Within hours of the invasion, NATO activated defense plans, putting more than 100 fighter jets at high alert in protection of NATO airspace, as well as 120 allied ships deployed from the High North Nordic territories to the Mediterranean, Stoltenberg said.

In recent weeks, U.S. military assets have been prepositioned in the region, and by Wednesday, Biden ordered the DOD to move U.S. forces in the European Command area of operations into the Baltic region and Poland.

All total, there are about 90,000 U.S. service members stationed in Europe, according to the DOD.

As part of the mobilization, Secretary of Defense Lloyd Austin III ordered the deployment of about 800 soldiers currently based in Italy into the Baltic region as well as the deployment of 20 AH-64 Apache attack helicopters from Germany. Another dozen Apaches are to be routed to Poland from Greece, the DOD said.

“These additional personnel are being repositioned to reassure our NATO allies, deter any potential aggression against NATO member states, and train with host-nation forces,” DOD officials said in a written statement.

The U.S. Air Force deployed six F-35 Lightning II fighter jets to the Baltic Sea and Black Sea region Thursday in support of NATO’s enhanced air policing mission, the service said Thursday. The aircraft are originally from Hill Air Force Base, Utah, and are assigned to the 34th Fighter Squadron operation out of Spangdahlem Air Base, Germany, the U.S. Air Force said.

“We are facing a dynamic environment, and the deployment of F-35s to NATO’s eastern flank enhances our defensive posture and amplifies the Alliance’s interoperability,” said General Jeff Harrigian, U.S. Air Force in Europe-Air Forces Africa commander.

In recent weeks, the Air Force has deployed the following in support of NATO’s policing mission:

Not on the list, but as important, are NATO reconnaissance aviation assets, according to one military expert.

“For NATO, there’s been a major role for NATO reconnaissance aircraft,” said Mark Cancian, an international security expert at the Center for Strategic and International Studies in Washington, D.C.

Reconnaissance aircraft are flying missions along the border of Ukraine, and surveillance drones, such as Northrop Grumman RQ-4 Global Hawk, are likely flying inside Ukraine, keeping an eye on the Russian build-up, he said.

“I’m sure now they’re watching Russian forces,” he said. “The intelligence on this build-up and the Russian attack has been excellent.”

The deployment of six F-35s, with two fighter jets sent to Latvia, Lithuania, and Estonia, underscores that the strategic stance is symbolic, he said.

READ MORE: What the Russian Air Force Has in the Sky

“The purpose from the beginning has been to reassure these countries that in a crisis, the United States and NATO would come to their aid really more with an eye towards the future conflicts than the current conflict.”

At the same time, Thursday’s invasion has provided NATO forces an insight into Russian military capability, specifically its use of heliborne forces, as well as missiles and aircraft used in strikes, Cancian said.

“I know people focus on NATO,” but those force roles are limited, he said. “But the Russians, they are in combat,” Cancian said. “We’ll learn something about their capabilities and modern air combat.”