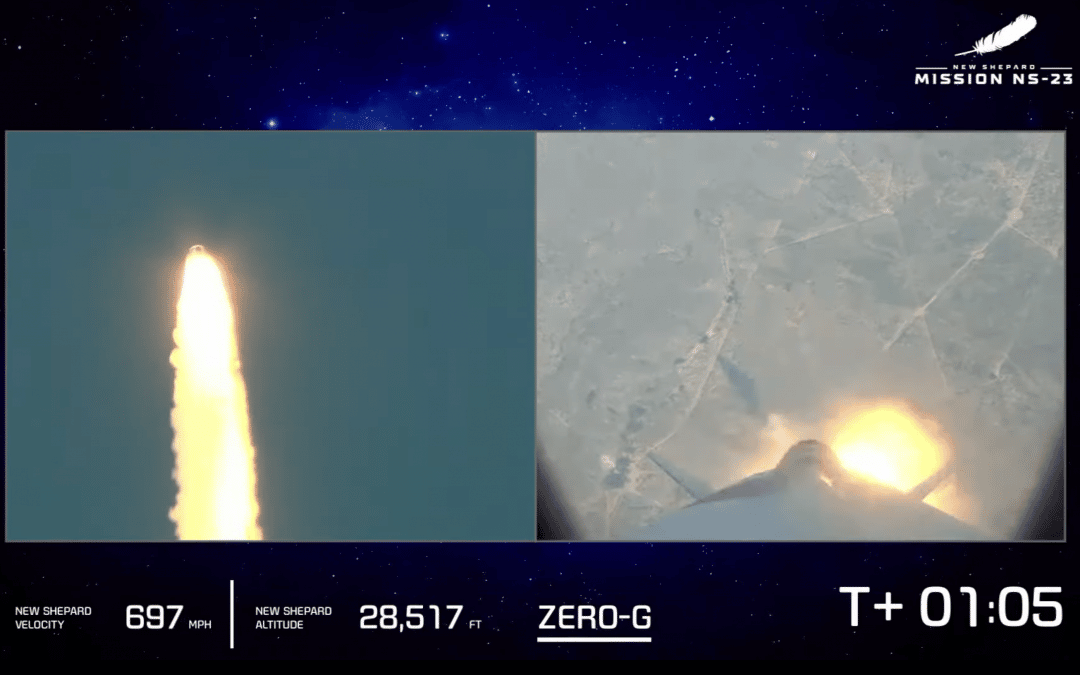 This morning the capsule carrying scientific experiments but no people, separated from the New Shepard rocket using the emergency mechanism. The capsule returned to Earth, but the rocket, the same kind that is used for transporting tourists to the edge of space, crashed.

The FAA and Blue Origin say there were no injuries.

A Blue Origin webcast of the launch began with images of the capsule bearing the name H.G. Wells on the launch pad.

The New Shepard rocket Mission N-S 23 launched from launch site one in West Texas this morning around 08:10 ET.

The webcast shows the rocket clearing the launch tower and the flight appeared normal as the rocket, traveling at 700 mph climbed through an altitude of 28,000 feet and reached what is known as max-q, defined by the Blue Origin announcer as “When the aerodynamic stress on the rocket is at its maximum.”

At 1:03 into the flight she continues, “We’re going to throttle back, then continue up to space.”

The next sound on the live video feed is a muffled exclamation. The narrator remains silent until 2:05 into the flight when she states, “It appears that we have experienced an anomaly with today’s flight. This wasn’t planned and we don’t have any details yet. But our crew capsule was able to escape successfully. We’ll follow its progress through landing. As you can see the drogs [parachutes] have deployed and the mains are going to be pulled out next.”

The main parachutes deployed 1:32 seconds later. The announcer notes that this flight was “A successful execution of the crew capsule escape system.”

The camera remains on the capsule as it and its 36 payloads — many of them experiments from NASA and high school students — return to Earth.

Under optimum conditions, the rocket launches propelling the crew capsule into the atmosphere where the capsule separates from the rocket, continuing on momentum to approximately 62 miles above earth. The capsule then floats back to earth under the chutes. The rocket lands vertically on the desert floor and is reused. This particular rocket had been used successfully several times before.

The FAA is responsible for protection of the public during commercial space transportation launch and reentry operations. The agency released a statement on today’s event:

“The FAA will oversee the investigation of Blue Origin’s NS-23 mishap that occurred at its Launch Site One location in West Texas.

The anomaly that occurred triggered the capsule escape system. The capsule landed safely and the booster impacted within the designated hazard area. No injuries or public property damage have been reported. This was a payload only mission; there were no humans aboard.”

The FAA continues, “Before the New Shepard vehicle can return to flight, the FAA will determine whether any system, process, or procedure related to the mishap affected public safety. This is standard practice for all mishap investigations.”

The mission, named NS-23 was the fourth mission in 2022, but the first without humans on board.

Thus far 31 people have made the trip to the edge of space as part of Blue Origin’s suborbital space tourism business. The capsule reaches the appropriate altitude allowing the participants a few minutes of microgravity and an incredible view according to actor-turned-aeronaut William Shatner, then returns to Earth under parachutes. The entire flight takes about ten minutes.

Monday’s launch was scheduled for two weeks ago, but was postponed due to bad weather.

Blue Origin was founded by Amazon billionaire Jeff Bezos in 2000. Bezos himself was one of the first to fly New Shepard during a crewed mission in 2021.