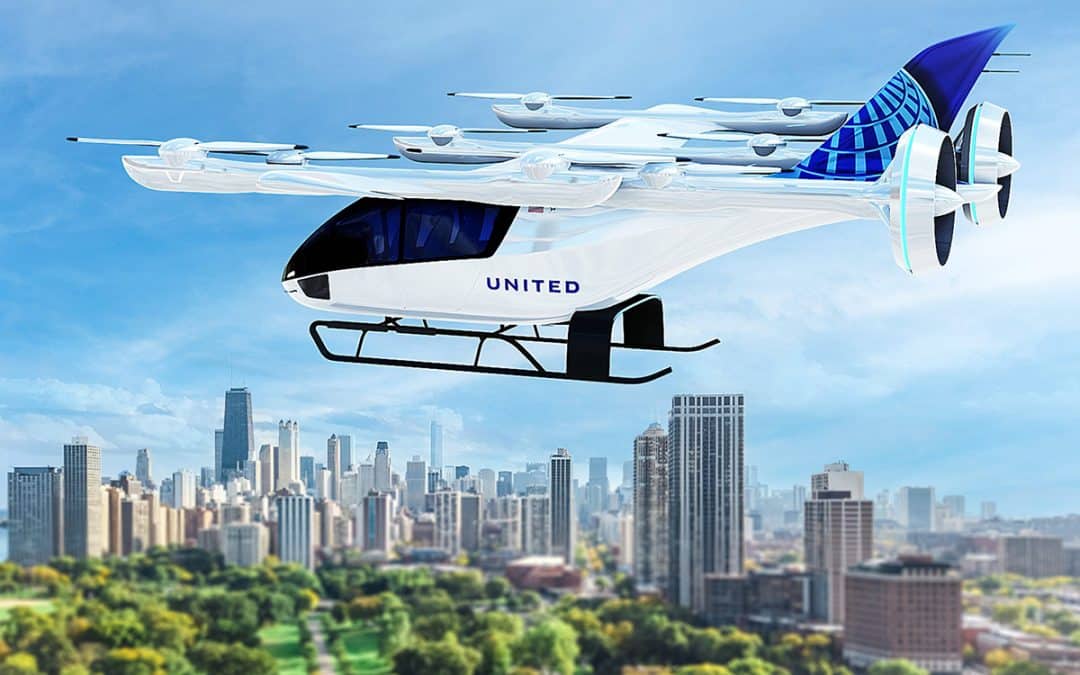 United Airlines (NASDAQ: UAL), which has already signed a conditional deal to invest up to $1 billion in Archer Aviation’s electric vertical takeoff and landing (eVTOL) business, is doubling down on its support of future air taxis by inking an agreement with a second eVTOL developer—Eve Air Mobility (NYSE: EVEX).

Also, the agreement provides United with options to buy 200 additional eVTOLs, according to the September 8 news release.

Eve Air Mobility—an Embraer spinoff—began trading as a separate company in May, with backing from another traditional airline, SkyWest (NASDAQ: SKYW).

Eve is one of dozens of companies currently developing eVTOLs aimed at offering passengers quick, convenient, and emission-free hops over gridlocked traffic. The entirely new form of air transportation, supporters say, has the potential to create thousands of new jobs for pilots at a time when airlines are already suffering from lack of flight crew availability.

It’s worth noting that former United CEO Oscar Munoz sits on Archer Aviation’s board of directors.

In a released statement, Eve and United offered a clue into the reason behind the airline’s decision to back a second eVTOL developer. The move “was driven in part by…Eve’s unique relationship with Embraer…Critically, their relationship includes access to Embraer’s service centers, parts warehouses and field service technicians, paving the way for a reliable operation. Upon entry into service, United could have its entire eVTOL fleet serviced by Eve’s agnostic service and support operations.”

From September 14th to 30th, our Eve Experience will take place in Chicago, an initiative that will prepare the city to launch electric urban air mobility (UAM) in the coming years.

“United’s investment in Eve reinforces the trust in our products and services and strengthens our position in the North American market,” said Andre Stein, Eve’s co-CEO, in a released statement. “I am confident that our UAM [urban air mobility] agnostic solutions, coupled with the global know-how we have been developing at Eve and Embraer’s heritage, are the best fit for this initiative, giving United’s customers a quick, economical and sustainable way to get to its hub airports and commute in dense urban environments. It is an unparalleled opportunity to work with United to advance the U.S. UAM ecosystem, and we look forward to it.”

Eve has incorporated rotors for vertical lift, conventional fixed wings, and pusher propulsion. The company says the aircraft will have “a practical and intuitive lift-plus-cruise design, which favors safety, efficiency, reliability, and certifiability.”

Up to 400 flying taxis from @EveAirMobility could join our fleet as early as 2026, revolutionizing the commuter experience in cities around the world. https://t.co/OI1UCjswCP pic.twitter.com/cjF7dxfC9W

The air taxi is expected to have a range of 52 nm (60 miles) and the ability to “reduce noise levels by 90 percent compared to current conventional aircraft.”

In addition, Eve said it is “creating a new air traffic management solution designed for the UAM industry to scale safely.”

First deliveries of the new eVTOL aircraft, Eve said, could come as soon as 2026.