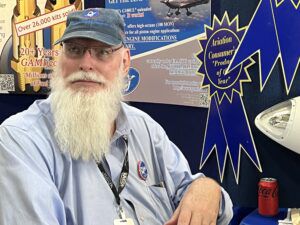 Later that day, George Braly, president of General Aviation Modifications Inc. (GAMI), held a press conference at his display booth rebutting much of what he heard at the Town Hall.

In the morning session, Bunce started the presentation, listing some of the participants in the EAGLE program, including the FAA, EPA, Department of Transportation and the National Science Institute. Later in the discussion, he added the National Petroleum Institute to the list, among others. “We have a timeline and we have a compromise [between] what’s doable and what can save the industry. Our future depends on finding a solution.”

Pelton took the next turn at the microphone, saying, “This is an international problem. There is no fight here [to preserve leaded fuel]. The EPA is going forward with an Endangerment Finding, and the deadline to get the lead out is 2030.” Pelton also pointed out that the problem has multiple intricacies, and stakeholders. “The fuel, itself, is only one. There’s also distribution, storage, and the fuel refiners and blenders that will make it.” The panel noted that to support multiple options for unleaded fuels, FBOs would be challenged to add dedicated tanks for each grade.

Baker enumerated more of the challenges, noting that the annual consumption of avgas nationwide totals just 180 million gallons, “about 3–4 hours’ worth of auto fuel.” He also pointed out that the sole producer of the lead anti-knock compound used in aviation fuel, Liverpool, U.K.-based Octel, is vulnerable to not only the U.S. EPA, but also growing restrictions on lead in Europe. Baker made the case, further, that counting on multiple octane grades of fuel is impractical and dangerous, as misfueling a high-compression engine with low-octane fuel could cause an engine failure. “The 30 percent [of the general aviation fleet] that requires higher octane burns 60 to 70 percent of the aviation fuel,” he said.

Asked about criticism of the results of the Piston Aviation Fuels Initiative (PAFI), Bunce defended the program, saying, “Fuels need to be tested for transparency to get fleetwide authorization.” He argued that PAFI was not meant to develop lead-free fuel, but rather to develop a testing program for candidates for a drop-in replacement for 100 Low Lead (100LL).

-Facilitate the development and deployment of an unleaded AVGAS with the least impact on the existing piston-engine aircraft fleet. This is a govt/industry collaboration to ensure all stakeholders are involved in a coordinated approach to fleetwide implementation.

-Established to develop a path forward for the identification, evaluation and fleetwide certification and deployment of the most promising unleaded replacement fuels.

-Overcome the significant hurdles which have hindered past efforts to develop an unleaded avgas replacement.

-Provides a sound process to ensure that this goal is achieved with a minimum of disruption to the general aviation industry and with the greatest likelihood of marketplace success.

Baker followed up with a discussion of the differences between a candidate fuel following the Supplemental Type Certificate (STC) pathway vs. industry-consensus testing such as through the ASTM validation process. “An industry consensus is needed for testing,” he said.

Bunce said, “An STC is proprietary. We [manufacturers represented by GAMA] have no transparency. All the chemicals [in the fuel] must be vetted, not only by the FAA, but also by Europe [to ensure against] issues 10 years down the road. We need industry consensus standards.” He cited the recent development of sustainable aviation fuels (SAFs) as an example of such a consensus.

Addressing the question of the cost of unleaded aviation fuel, Baker didn’t dispute that the new fuel would be more expensive, but that might be temporary. “Long-term,” he said, “any fuel without the [infrastructure] restrictions of lead could become less expensive.”

Bunce suggested that existing tests for detonation could be “antiquated.” “What if the margins were too big on the previous test standards?” he asked.

In his summing up, Pelton said, “We need the fuel, the certification process, producers and a distribution system. We have to get all those to line up or someone will be left behind.”

At his press conference later that day, GAMI’s Braly didn’t mince his words of frustration, citing last summer’s Supplemental Type Certificate. While it included just a small number of engines, there was the implication that the list would expand “to include all spark-ignition engines and the aircraft that used them,” Braly said. “That sounded like fleetwide approval to us.”

Braly went on to show a copy of an email he received from the FAA on March 2, complete with an 18-page list of engines and a 51-page list of “hundreds of aircraft models” that would be included in the STC. That email followed an extensive audit by the Atlanta field office of the FAA from Dec. 17 to Jan. 4 examining the last 12 years of research and testing, he said. The message he received from the audit team was that the STC was “suitable for FAA approval.”

Now, Braly said, another audit is ongoing, scheduled for completion by May 2, and he’s been assured FAA officials are “almost certain” the STC will be approved at that time. He is not convinced.

Braly went on to describe a litany of hoops he says GAMI has been asked to jump through, including six Technical Advisory Board hearings starting in 2010, consisting of “rooms full of FAA subject matter experts.” He also described his certificate of production authority that shows GAMI has not only the right but the obligation to rescind production approval to any refiner or blender that fails to maintain GAMI’s standards—and a process through which the refiner would be obliged to supply a 5-milliliter sample of its license-produced product for quality-control analysis.

At the close of the press conference, Braly related a family phone call, during which his son said, “Dad, you’re the single most stubborn human being, ever.” Braly concluded, “It’s important that we get this done for general aviation.”