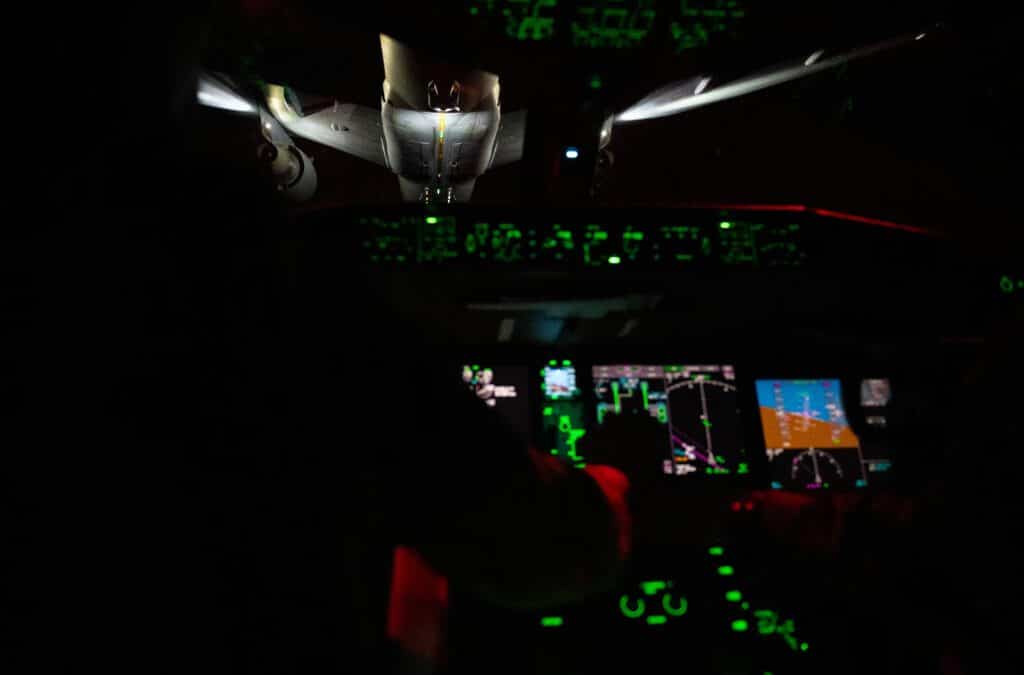 When does a flight become too long? Three hours? Six? Half a day? The aircrew of an U.S. Air Force aerial refueler recently recalibrated the concept of a truly longhaul flight by flying a KC-46A Pegasus for 24.2 hours during an endurance test of the tanker replacing the service’s aging KC-135 Stratotanker fleet.

The record-breaking 9,000-mile flight, which marked the longest ever recorded for the Air Mobility Command (AMC), began May 5 when the crew from the 22nd Air Refueling Wing departed McConnell Air Force Base, Kansas, the command announced this week.

Over the course of the next 24 hours, the crew of six pilots, three boom operators, and a physician assistant tested the refueling capabilities of the KC-46, as well as collected data on the feasibility and potential risks for crew members during such a long endurance flight.

“This 24-hour sortie is a critical step in the operational evolution of tankers, and the role the KC-46 plays in that,” said Col. Nate Vogel, 22nd Air Refueling Wing commander.

“This sortie helps mobility forces identify how best to operate on long-duration sorties from human, to machine, to mission aspects,” Vogel added. “Long-duration flights are inherently full of risk, and conducting this operation now allows us to identify those risks, and then build and apply mitigations in a more controlled environment.

“The Joint Force, our allies, and our partners rely on our capability to project combat power globally…we need to be ready to execute anytime, anywhere. This 24-hour sortie is a huge step in realizing that vision.”

While in air, the KC-46 refueled four U.S. Marine Corps F-35s, performed dry contacts with another KC-46, and was refueled, AMC said. In addition to flight operations, flight crew fatigue and sleepiness levels were monitored.

“Two pilot teams rotated on and off four-hour shifts,” according to an AMC statement. “A backup pilot team, ready to step in as needed, focused on gathering data and taking extensive notes. The rotating shifts ensured adequate time for rest and the safety of the mission.”

Crew members were administered the Karolinska Sleepiness Scale, which is a detailed questionnaire that quantifies sleepiness, as well as the NASA-developed Psychomotor Vigilance Task test, which monitors alertness and cognitive performance. Pilot schedules were also optimized during the flight through the Fatigue Avoidance Scheduling Tool software, AMC said.

“In flight medicine, our goal is to preserve not only the health and safety of the aircrew, but also to preserve the safety of the missions those aircrew perform,” Maj. Cory Henderson, 349th Air Refueling Squadron aeromedical physician assistant, said in a statement.

The sortie comes close on the heels of another milestone for the tanker program. In late April, a KC-46A refueled a Spanish EF-18 Hornet in what was the first operational refueling of an international receiver. The operation, which occurred at Moron Air Base in southern Spain, in Spanish airspace, underscores its interoperability with allies and partners, according to service leaders.

The Air Force began operating the Boeing-produced next-generation aerial refueler in early 2019 and currently has a fleet of 57 aircraft. The service has plans to buy a total of 179 tankers, according to Boeing.