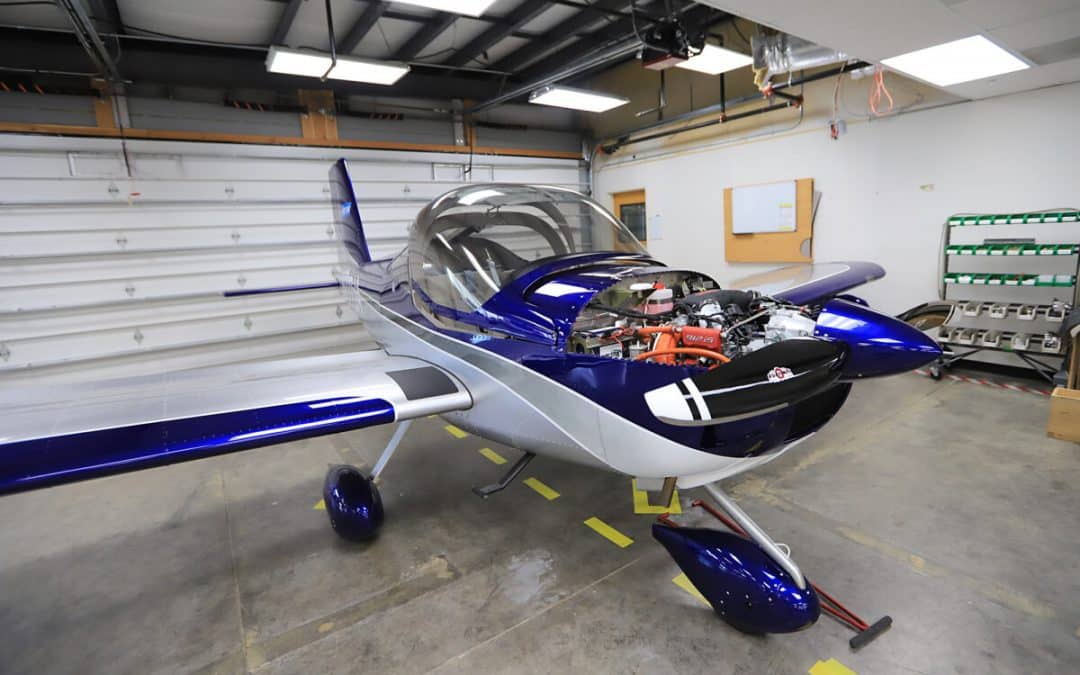 For those of us lucky enough to attend EAA’s annual AirVenture show in Oshkosh each summer, it is hard to miss the acres of beautiful experimental/amateur-built (E/AB) airplanes that seem to go on forever. We know from looking at the workmanship of these airplanes that someone spent thousands of hours in their shop meticulously assembling parts from a kit, or handcrafting the parts from raw materials.

If you’re like me, you walk the rows of these E/ABs and are envious of the builders who possess the skills to complete these airplanes. While being comfortable in saying that I doubt I have the mechanical ability to complete an E/AB airplane project, I know there is still a great way to own one and fly it with confidence.

In the Room Where It Happens

The Aircraft Assembly Division (AAD) is a large, well-lit portion of the Van’s Aircraft factory in Aurora, Oregon. Here, employee builders dedicated to the AAD work through all of the steps it takes to go from stacks of wooden crates full of thousands of parts to a signed-off RV-12iS SLSA ready for a new owner to fly home. At several workstations, airplanes are in various stages of completion, while other areas of the AAD are dedicated to paint, installing cabin upholstery, and avionics installations.

The pace inside the AAD seems calm but focused, as the bright fluorescent lighting provides assemblers with a good look at every part. It is not a noisy factory setting with people slapping together airplane parts on an assembly line, it is more of a laid-back atmosphere, where talented builders handcraft each airplane with as much care and attention as if they were building it for themselves.

If the inside of the AAD looks like any of the private shops of E/AB builders, that’s because, for all intents and purposes, this is just a big version of the same thing, says Van’s Aircraft vice president and COO, Greg Hughes. “All the parts used to build the SLSA version of our RV-12iS are made in the same factory, by the same people, as the kits we ship to builders worldwide. The same inventory of parts that go into the AAD goes into crates we ship to customers. The parts are delivered to the AAD effectively as a customer. The process for building is nearly identical to that of a private builder—it’s the same airplane built from the same kit.”

Hughes did however explain that while the finished product is identical to an amateur-built RV-12iS, the factory process is slightly different.

“We do pre-build or pre-configure certain parts and have those staged, and we can have different sections of the airplane being built simultaneously by different people in the AAD. So while we may not be following the exact steps an amateur builder follows, we are still doing the exact same work,” he said.

Van’s Aircraft has perfected the process of designing, manufacturing, and shipping airplane kits for its RV line of E/AB models. Hughes says the Van’s parts picking and crate packing teams ship between 65 and 80 “sub-kits” each week all over the world. “An RV-7 has four sub-kits for the wings, empennage, fuselage, and finishing. So 80 sub-kits in theory represent about 20 airplanes. Just to give you some historical reference, we were shipping half that amount just a year ago,” he said.

Those same sub-kits are the ones that end up in the AAD to be assembled into ready-to-fly RV-12iS SLSAs. And every nut, bolt, and rivet is assembled with strict adherence to ASTM standards, the set of requirements developed for checking and maintaining quality. “Even though the parts are manufactured in another area of our facility,” Hughes explained, “we check each part carefully to ensure they are acceptable to ASTM standards. In the unusual event we find a part that is questionable in some way, those parts are quarantined and not used. We have all of the standards-based controls and requirements in place to guide our dedicated team of people, who do nothing but build the RV-12iS airplanes.”

Once an RV-12iS SLSA has been assembled, Van’s test pilots run it through the same types of flight tests as builders who have put their kits together themselves. As I toured the AAD, I saw a gorgeous RV-12iS in a blue and white paint scheme just inside the closed hangar door, ready for final inspections. It had completed full-flight testing and was about to be inspected with experienced eyes by the AAD staff. Once any squawks have been remedied, the airplane would be polished to appear “showroom perfect” and its new owner would be summoned to come to Aurora and pick up their new ride.

While one RV-12iS SLSA is going out the AAD’s hangar door to a buyer, another is being assembled. [Courtesy: Dan Pimentel]

The order book is at high levels across the entire Van’s product line, and that holds true for the RV-12iS SLSA as well. Current lead time on the fully-assembled RV-12iS is a “moderately conservative” 20 months, Hughes said, with a $5,000 deposit due upon ordering to get in line. An additional $55,000 deposit is due upon commencement of aircraft construction, with the balance due upon delivery. The length of that “line” varies according to order loads and delivery schedule.

The post Van’s RV-12iS SLSA: They Build it, You Fly it appeared first on FLYING Magazine.