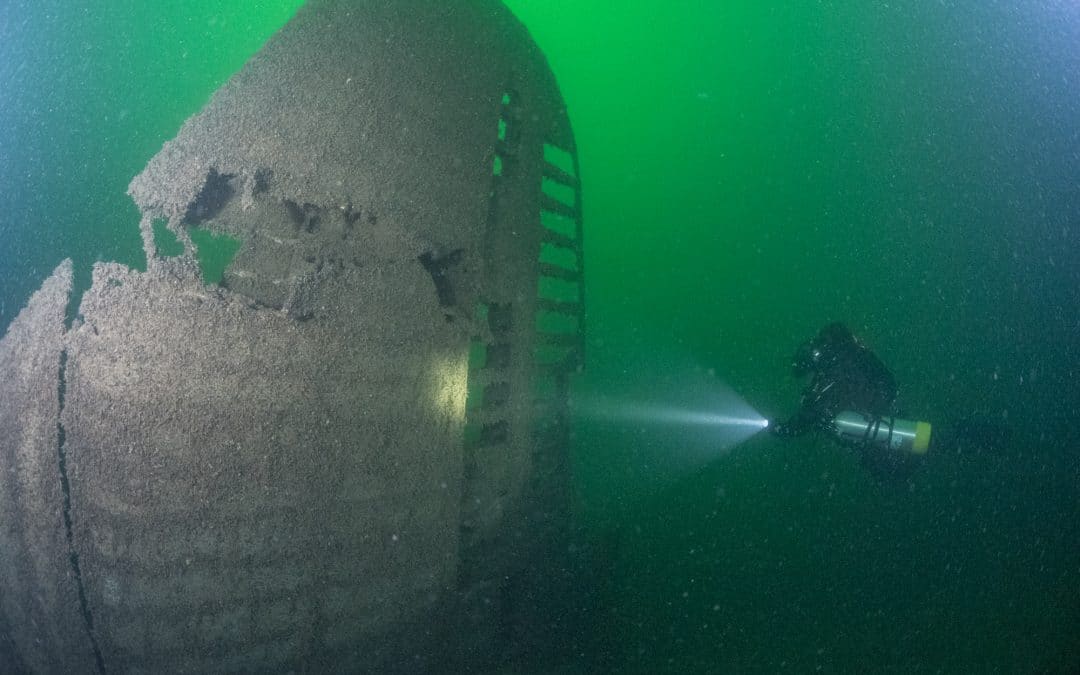 There is a saying to remember when you visit a national park: Take nothing but pictures, leave nothing but footprints. Unfortunately, some people ignore that admonishment, and that is what authorities at Lake Mead Recreation Area are concerned about as the water level drops and two World War II aircraft that have been submerged in the lake for decades become easier to access.

Lake Mead is on the border of Arizona and Nevada. At maximum capacity, Lake Mead is 112 miles long and measures 532 feet at its greatest depth. The lake supplies water for Arizona, Nevada, and California. According to park officials, the lake has been steadily shrinking since 1983 because of increased demand for water and a prolonged drought. Federal studies indicate the lake has dropped 64 feet since 2020.

Let’s talk. Lake Mead provides water to about 25 million people in the American West and Mexico.

The aircraft under the lake’s surface are a Boeing B-29 and a Consolidated PBY Catalina. They are considered archeological sites and can be viewed by divers, but not touched. Even stirring up the silt on the bottom of the lake can damage the wreckage. Both aircraft have been in different locations at the bottom of the lake since the 1940s. Both were located in the early 2000s.

The signature shape of the B-29’s empennage is still visible in spite of the mussel infestation. [Courtesy of Brett Seymour]

According to Pacificwrecks.com, B-29 S/N 45-21947 rolled off the assembly line in Wichita, Kansas, in September 1945, after the end of World War II. The aircraft was modified to be a photo reconnaissance ship, then later for atmospheric weather research by having its armaments removed.

In 1947, the aircraft, then designated an RB-29 Superfortress, was assigned to Naval Ordnance Test Station at Naval Air Weapons Station Inyokern, now known as NAS China Lake. The aircraft’s mission was to study the upper atmospheric conditions for a ballistic-missile guidance system for intercontinental ballistic missiles (IBMs) in conjunction with rockets tested at White Sands Missile Range.

Did you know that on July 21, 1948, a B-29 Superfortress Bomber crashed into Lake Mead while engaged in high-altitude atmospheric research? The crew of five survived the crash, but the plane was lost in the depths of the lake. It was discovered by local divers in August 2002. pic.twitter.com/ODtDeXLtRX

On the morning of July 21, 1948, the aircraft took off from China Lake with a crew of five —four military personnel and a civilian contractor.

Onboard the B-29 was a piece of equipment known as the Sun Tracker. The purpose of the Sun Tracker was to measure the intensity of light at different altitudes, including infrared light. In order to do this, the crew had to fly at specific altitudes using specific rates of climb and descent as measurements were taken.

According to the mission report, the aircraft climbed to 30,000 feet over the Grand Canyon then dove to approximately 100 to 300 feet above Lake Mead. In the flat morning light, it’s believed that the pilot could not tell how close the aircraft was to the surface of the lake. The aircraft struck the water in the Overton Arm area. The impact tore three of the bomber’s four engines off. The aircraft skipped like a stone, then came to a stop as the fourth engine caught fire.

The five crew members were able to escape from the aircraft into life rafts—the only injury was a broken arm. The B-29 sank for 12 minutes, eventually coming to rest some 280 feet below the surface.

The five-member crew escaped the plane in a life raft and signaled to an airplane above. The @NatlParkService was notified, and rangers rescued the crew. The only injury was a broken arm. 4 if the 5 are pictured below. #LakeMeadB29 pic.twitter.com/emxZqgX8Wv

The crew had not filed a flight plan, and realizing that no one knew where to look for them, deployed a dye canister in the water. As luck would have it, an airline pilot who had served in World War II was flying overhead, saw the dye marker and knew it meant an aircraft was down. He reported the crash to authorities. The crew was rescued several hours later by a National Park Service (NPS) employee.

Over the years, there were several unsuccessful searches for the aircraft. Eventually, the military gave up, and the B-29 in the lake became the stuff of campfire legends.

Cockpit of the downed B-29. All five crewmembers survived. [Courtesy of Brett Seymour]

The Wreckage Is Located

In 2001, a local diver using side-scan sonar—something that is illegal to do in the park without a permit, and which, according to authorities, he did not possess—found the aircraft at a depth of 230 feet.

Because the aircraft was in cold freshwater, it was fairly well preserved.

Officials from the NPS did not know the aircraft had been found until the father of one of the divers held a press conference about the find—but the finders refused to release the coordinates of the site as they intended to raise the aircraft and sell it.

The NPS turned to the Bureau of Reclamation for help, as the agency conducts surveys to assess how sedimentation is changing the water volume of the lake. Using this high-resolution data, the NPS located the aircraft in 2002.

The NPS won custody of the aircraft in a court battle that ensued and took up the challenge as to how best to protect the resource.

According to Christa Johnston of the Lake Mead NRA Public Affairs Office, the B-29 is a popular guided dive spot for many water recreators.

The park has authorized two commercial dive companies, Las Vegas Scuba and Tech Diving Limited, to lead guided tours of both the B-29 and other sites. Permits and a certain level of experience are required as these are challenging dives.

Las Vegas Scuba has an informational page about the B-29 dive, warning customers that if they touch the aircraft either on purpose or accidentally, their dive is over, adding, “Due to the location and extremely sensitive nature of the B-29 site, exceptional buoyancy and fin skills are a must. If the silt on the plane or the lake bottom is disturbed it can take 24 hours for it to settle.”

Tech Diving Limited notes that they are not scheduling dives to view the B-29 at this time because the water level has dropped so much that using the boat ramp to access the site is dicey at best.

In addition to the shrinking water level, the aircraft is also being adversely impacted by an increase in water temperature. The warmer water has made the lake a more hospitable environment for the quagga mussel, an invasive species from the Ukraine. The quagga mussel is about the size of a penny, but the creatures nest in colonies. They started appearing in the lake around 2007 and have attached themselves to the wreckage, putting weight on the fragile skin of the aircraft.

The B-29 is not the only World War II-era aircraft in the lake. In 2007, the NPS announced that it had located the wreckage of a PBY Catalina flying boat that crashed in 1949.

PBY was the U.S. Navy designation for the American and Canadian-built flying boat of the 1940s. PB stands for Patrol Bomber, Y is the manufacturer identification for Consolidated Aircraft. These amphibious aircraft saw action in every theater of World War II.

According to the NPS, after the war the PBY in the lake was retired from military use. At the time of its demise, it was in the hands of a civilian owner, the Charles Babb Company of Los Angeles. The aircraft had taken off from Boulder City Airport (KBVU) on a test flight. The flight crew consisted of pilot Russell Rogers and mechanic Charmen Correa. There were three passengers: Clarence Masters, KBVU airport operator Ted Swift, and an associate, George Davis. Rogers was attempting to land in the Boulder Basin area of Lake Mead but did not realize that the landing gear of the amphibious aircraft was still down. The landing gear hit the water, causing the aircraft to flip over. The aircraft then caught fire. Swift and Masters were thrown clear of the wreckage but badly injured, dying the next day. Rogers and Correa were trapped and went down with the airplane. The only survivor of the crash was Davis, who suffered a broken leg.

According to the NPS, the aircraft now rests in two pieces at the bottom of the lake. In 2007, it was at 190 feet. Today, the wreck is approximately 135 feet below the surface, which is still at a depth that requires a guided dive and an increased level of skill and experience.

Like the B-29, the PBY is considered an archeological site, tampering with or removing any material or items from it is prohibited by federal law.