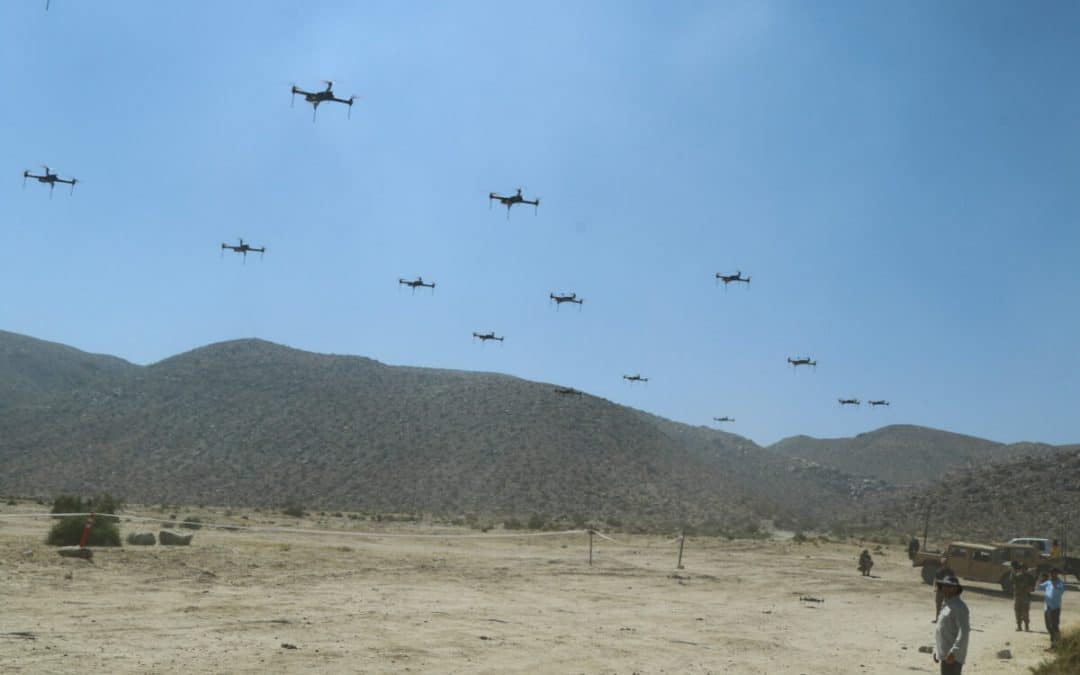 The U.S. Army is preparing for the future of warfare—one that it says will come with swarms of deadly combat drones filling the skies and dropping munitions from above.

It’s a scenario that seems more appropriate for a science fiction movie, or perhaps even a Hitchcock-esque nightmare. Earlier this week, however, the concept moved closer to reality at an Army training facility in California as the muted, concerted buzz of dozens of quadcopters, networked on a singular flight path, filled the morning sky.

The spectacle, shared in a video by an Army training commander, is nothing short of chilling.

“Drones will be as important in the first battle of the next war as artillery is today,” he added.

The prediction is one backed up by economists, according to a new study that says the military drone market is expected to swell by an average of about $1 billion annually over the next five years.

At sunrise this morning a swarm of 40 quadcopters all equipped with cameras, MILES, and lethal munition capable launched in advance of 11th ACR’s attack on a prepared defense by 1AD. Drones will be as important in the first battle of the next war as artillery is today. pic.twitter.com/zPQ2I8SoqN

The need to integrate combat drones into future war scenarios has been obvious since at least 2018, when The Islamic State used swarms of off-the-shelf drones modified to release munitions in Iraq, Afghanistan, and Syria, Vice reported.

Earlier this year, the Army conducted what it called its largest drone swarm test ever when it launched nearly three dozen networked combat drones above the Great Salt Lake Desert.

At a time when combat drones have been pivotal in modern conflicts, such as the ongoing war in Ukraine, officials at the Army’s National Training Center are working to integrate small drones into immersive combat scenarios designed to prepare soldiers for deployments, Task and Purpose reported.

“The mantra of NTC is to prepare formations to win the first battle of the next war, and what we’re looking at is: Are we properly portraying what the next war will look like?” Taylor said, according to the report. “We believe that lethal drones will be a huge part of the next battle, and will represent an asymmetric advantage for mid-tier adversaries.”

The skills needed to operate military drones, along with availability of drone pilots, is considered a restraint on the future military drone market, according to a recent study.

“The number of pilots available for high precision operations is comparatively low,” Markets and Markets said. “An increase in drone adoption in the military drone verticals adds to the growing need for skilled drone pilots. Presently, to reduce the number of accidents caused due to the poor control skills of drone operators, efforts are underway to improve the autonomy of these systems.”

Not all drone swarms are meant to be menacing, however.

Korean Air, for example, has turned to using drone swarms to inspect aircraft exteriors. High-performance cameras on drones can spot defects not easily seen with the naked eye, the airline said.

Perhaps the biggest reward of drone swarm inspections, however, is time. The technology can slash visual inspection times from about 10 hours to four hours, the airline said during a demonstration late last year.