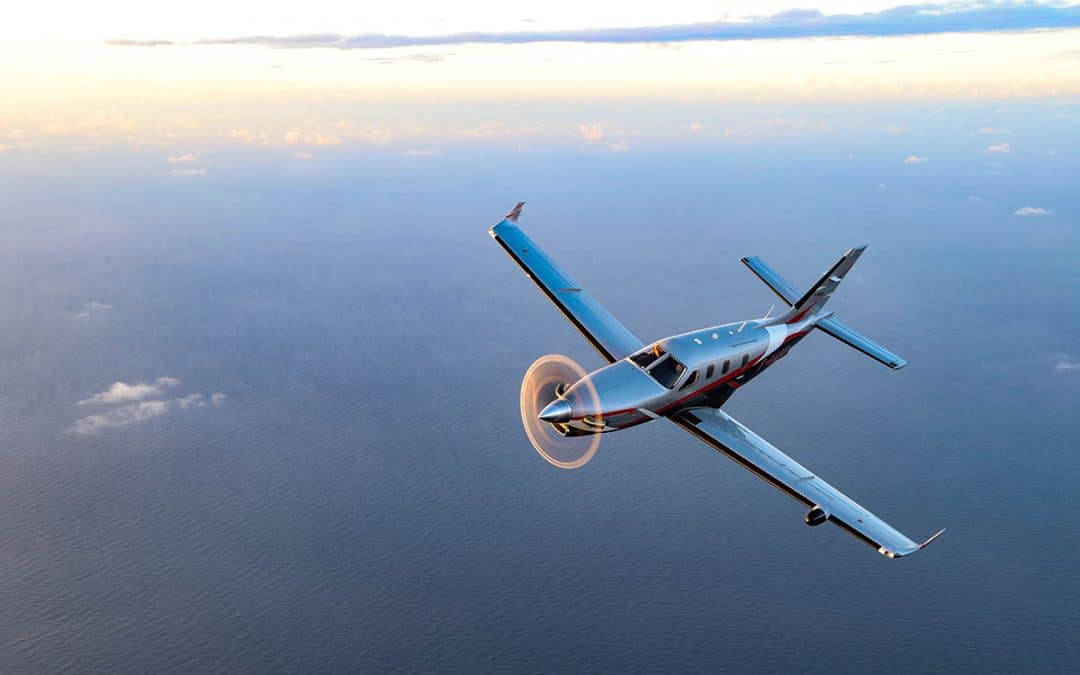 I look through the images and I swear I am smiling the entire time.

Scrolling through them on my phone, in my mind I go straight back to flying formation circles over the Atlantic coast of Florida … finding the sweet spot on the yoke for my hand … the Zen-like focus on the photo ship—this time a Cessna 310 piloted by Bruce Moore—and Jim Barrett’s lens poking through the open baggage door.

I remember too, that I’m actually singing to myself, just under the volume where I’d break the squelch and subject Daher training director Wayman Luy to my vocal stylings.

Sunshine on my shoulders makes me happy … the sun breaks over the low cloud deck, and we catch its rise in the arc of the prop. And now, it’s FAA certified.

The sun breaks on the Daher TBM 960. [Credit: Jim Barrett]

Following my first flying acquaintance with the TBM series on a magnificent ferry flight last fall in a TBM 940, I’ve been waiting patiently for my next date.

The payoff? Daher had a surprise in store. How to build on the game-changing 940 with HomeSafe, Garmin’s Autoland suite that secured FLYING’s 2021 Innovation Award? The answer: a new model that moves the series forward.

If you recall, HomeSafe enables the owner-pilot to help sell the airplane to a non-flying spouse—and gives them both a button to push in the event the pilot loses the ability to put the airplane down safely. Not everyone is going to be as cool-headed as that Cessna Caravan passenger who landed in Palm Beach following his pilot’s sudden incapacitation back in May. I heard one colleague say after watching Garmin’s demo video of Autoland, “Where’s the onset of panic?” The button is big and red and in the middle of the panel for this precise reason, though no one says that quiet part out loud.

One non-pilot spouse of a TBM 940 owner I spoke with recently brought it up herself—I didn’t ask. Though she has flown with her husband for many years in pursuit of their own aviation business, and she knows how to land the airplane with confidence, she much prefers having the HomeSafe protocol as an option. It brings her real peace of mind.

After introducing HomeSafe in the 940 just two years ago, Daher has chosen to continue its plan to develop a new model in a regular biennial rhythm. So, what’s new with the 960? It turns out that the airplane takes a solid step in an eco-direction, and in a bit more automation that leads to real benefits for pilots and owner/operators focused on long-term efficiency and extended TBOs.

I sat poised to fly over to Daher’s Aircraft Division headquarters in Tarbes, France, at a moment’s notice, but I had to wait until the 2022 Sun ’n Fun Aerospace Expo to get my hands on the latest TBM.

As it turned out, this gave me the chance to follow the demo unit, F-HAHF, serial number (SN) 1409—which I’d likely seen on the line in parts during my visit to Tarbes in November 2021—across the pond via FlightAware, then sit in the airplane on Daher’s static display with senior vice president Nicolas Chabbert. He’s an active ferry pilot for the TBM model series he has helped to shepherd and promote since 1992. Pilot to pilot, he debriefed the crossing flight with me, and then walked me through the key updates I would find in the 960 when I flew it.

Inside the TBM 960 Flight Deck, the Home Safe button sits prominently in the top center of the panel for easy access by the pilot or right seat passenger. The Garmin G3000 flight deck displays information from the new Garmin GWX 8000 weather radar, and behind the scenes, the Garmin GDL 60 datalink marks the first installation of the new transceiver. [Credit: Jim Barrett]

In my conversation with Chabbert, he referred to the guiding principles of flight deck and control design that he compared to those of Audi. As a longtime Audi driver, I saw the connection. I had the chance to drive the Audi Quattro—not the coupe but the Rally car—about the same time I learned to fly in high school. I first drove a stick in a 4000 Quattro—and loved the A4 1.8T I had years later. The quest for high-end ergonomics and solidity in control feel translates across the designs from car to airplane.

In my introduction to the 960’s updates, Chabbert gestured through the flow for engine start—greatly simplified from those starts in the early 700 series and even in the 940 from my recent acquaintance. He purposefully left the throttle an inch forward to demonstrate the CAS message that illuminates when the system registers a discrepancy or a parameter out of position for the automated sequence to continue.

He talked me through Daher’s flight test process, and the thoughtfulness driven into details such as the integration of the Garmin G3000 suite into the panel—such as the 3-degree cant to the display bezels to help position them in an optimized place for pilots with varying vision. It’s a nod to the average age of the TBM pilot group and the progressive lenses we may wear.

The airframe has proven an elegant match for both the flight deck and the Pratt & Whitney PT6 series that powers it. And that’s where the largest change lies—in the integration between the free-turbine PT6E-66XT and the brains of the airplane. The dual-channel FADEC along with the prop control—which Pratt & Whitney calls the engine and propeller electronic control system (EPECS)—uses segregated control, redundant interfaces, and protection signals, and sends the engine parameters, including fault messages, to the avionics.

The 960 helps the pilot leverage this stream of more than 100 data points through the DCTU—data collection and transmission unit—that records information from the FADEC and the Garmin integrated avionics unit (GIA), storing the data in a non-volatile memory resident onboard. The DCTU safeguards the data, and once the airplane is on the ground at a low power setting, it connects to a cellular network via the Garmin GDL 60. When the engine shuts down, the data transfers to a ground station for trend monitoring and to stay on top of any maintenance required. The DCTU, automated start, and the EPECS governing the engine within tight parameters—like a 1,925 prop rpm limit at max power settings—leads to the 5,000 hour TBO.

For our first flight, I met on the approach end of Runway 5 at Lakeland Linder International Airport (KLAL) with Luy and Philippe de Segovia, director of TBM product marketing. When it was finally our turn to taxi out, I thought back to those takeoffs I’d monitored on the ferry mission. I lined up, brought the throttle up, and let the AT take it from the midpoint of its throw. After less than 3,000 feet of ground roll in the hot sun and a little back pressure on the yoke, I let the speed climb to 124 kias—right on target.

We climbed to 10,500 feet over central Florida and soon sped out of Lakeland’s saturated airspace. The airspeed came up to about 220 kias—with plenty of green arc still to go on the PFD’s airspeed tape—there’s no yellow arc, only the red bar at 271 knots. Maneuvering speed is a healthy 160 knots, so we slowed below that figure before putting the 960 through steep turns and a stall series. I witnessed no bad habits, just a clean honest break in an unaccelerated stall. The control harmony is clearly one reason TBM pilots become loyal.

We stopped at Airglades Airport (2IS) for a series of three landings and taxi-backs to give me a feel for the 960—with plenty of space on the nearly 6,000-foot-long runway. I found it straightforward to stay on target approach speeds, coming over the fence while bleeding off from 85 knots. It felt facile even on my first try to use less than half of the runway length. We took off for Pompano Beach (KPMP), made an RNAV approach to Runway 13, touched down, and called it a day.

After a few days, fresh and ready to fly our photo mission, the sweet spot I sought on the controls clicked. I used the trim wheel for fine-tuning during station keeping and loved that balance. Later in the day, I had the opportunity to fly again with Luy in an early model TBM 700. While flying through a series of maneuvers, I felt subtle differences in pitch, a bit more in roll, but the same stately sense in control feel overall. With the addition of the 2-foot-tall winglets that started on the 900, the improvements in handling between the early and later models made sense.

The 960 comes out a little more expensive than its turboprop single competitors in this area, but the latest upgrade in the TBM series draws our affection because of its speed, added safety features, nimble handling—and, yes, its stylish good looks.