William Shatner’s Space Trip Now the Subject of a Documentary 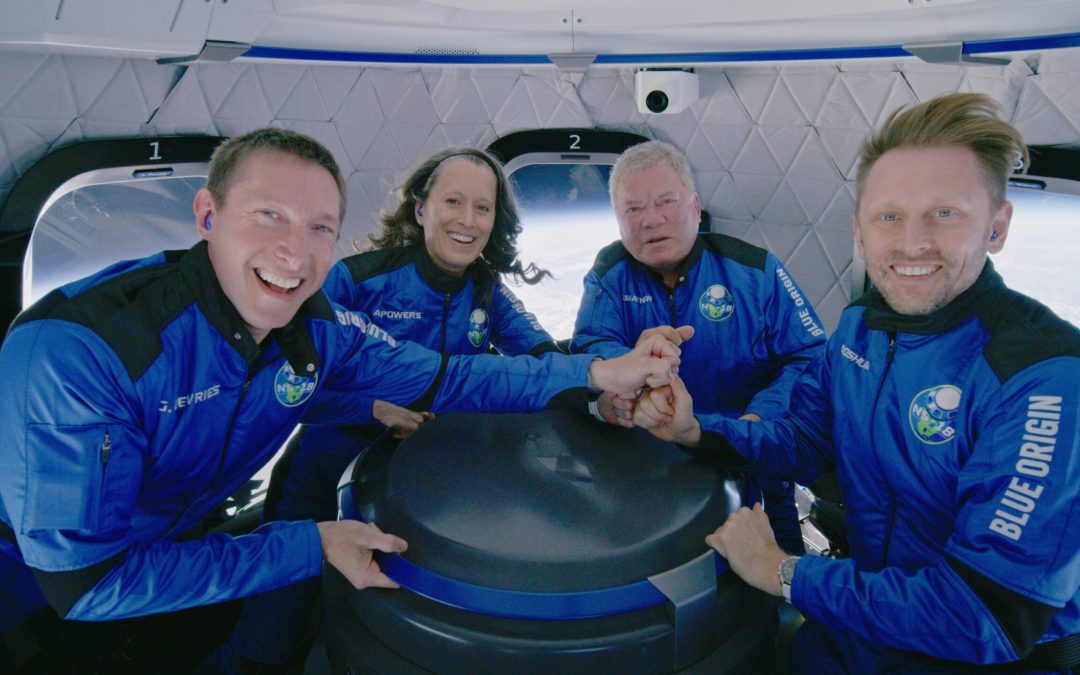 In October 2021, actor William Shatner, then 90, became the oldest person to travel to space, breaking the previous record held by famed pilot Wally Fuk. Now you can get a behind-the-scenes look at the journey with the release of Shatner in Space, a documentary produced by Amazon Prime that’s now available on its streaming service.

The actual flight lasted 10 minutes, 17 seconds. The video runs 46:16 and begins years before the flight, with how Shatner came to be one of four astronauts aboard Blue Origin’s New Shepard, named for astronaut Alan Shepard.

The documentary includes video clips from Shatner’s early career in black-and-white science fiction television anthologies combined with scenes from his time as Captain Kirk on Star Trek and highlights his astronaut training.

In the new film, Amazon founder and Blue Origin owner Jeff Bezos, 58, says he was inspired by Captain Kirk so much that he invited Shatner to visit Blue Origin headquarters in Kent, Washington, in 2019.

Bezos escorts Shatner on the tour, explaining how they are building New Shepard, a reusable space tourism vehicle, with the idea of enabling persons to travel to space. It’s fun to watch Bezos, a self-described Trek fan, share his story with Shatner, who realizes that a great many of the people who are working at Blue Origin were, in some fashion, inspired by Captain Kirk. During the tour, Bezos asks Shatner if he would like to be one of the space tourists and Shatner says, “Yes.”

The video takes viewers through Shatner’s decision to take up Bezos’ offer to travel to space. There’s an awkward scene where he tells his family about his decision. The rest of the video documents the preparation of the astronauts on the mission.

The purpose of these space tourism flights, says Bezos, is to show people how fragile the Earth is, and perhaps, once that is realized, people will work to protect the environment.

“I think it’s essential,” he says. “That’s what needs to happen. That’s what Blue Origin is working on, that will change everything. You have to be stubborn on the vision and flexible on the details. That’s how you build a road to space.”

Shatner, clad in the blue-and-black Blue Origin astronaut flight suit and wearing two pilot watches on his left wrist, appears to be enjoying the astronaut classes.

The New Shepard is an autonomous vehicle—the astronauts/tourists do not have to do anything, no button pushing, lever flipping, no flying—they are strapped into astronaut couches for launch and recovery. Approximately 20 seconds after launch, New Shepard released from the rocket, and there was a period of weightlessness as it continued its climb to approximately 300,000 feet, to the so-called Kármán line, the internationally recognized boundary of space. The astronauts float around for a bit then are given a one-minute warning when it is time to strap back in for the return to earth. The capsule lands with the help of drag chutes on the desert floor in Texas.

Shatner was joined on his flight by Audrey Powers, a Blue Origin vice president who oversees New Shepard operations, and two paying customers—Chris Boshuizen, a co-founder of the Earth-observation company Planet Labs, and Glen de Vries, a co-founder of a company that builds software.

There are interviews with each of the other participants. Powers, Boshuizen, and de Vries describe how traveling to space has been a desire since childhood. Powers also talks about her career at NASA and Boshuizen shows a Lego spaceman from his childhood he intends to carry with him on the trip. Watching de Vries talk is bittersweet, as he died about a month after the flight in a small airplane crash.

There is a poignant moment when Bezos asks Shatner to carry a paper tricorder and communicator Bezos made as a child with him into space.

The video follows the Blue Origin astronauts through their few days of training from their ground school to a tour of the New Shepard capsule where they are assigned seats. Shatner pointedly remarks that he is trying not to have any expectations about the flight as he doesn’t really know what to expect.

The combination of the video, the music, and the expressions of joy on the faces of the launch team, the crowd in attendance and the astronauts during the launch sequence will give you chills.

Shatner, upon landing is emotional and visibly moved, and thanks Bezos for giving the life-changing opportunity, saying the view of the Earth showed its fragility and he drives home the point that it must be protected and healed from pollution.

Bezos, in the after-flight commentary sums it up.