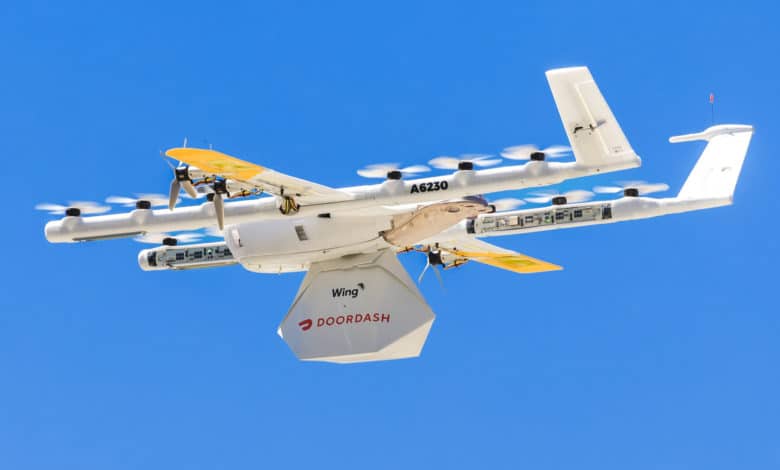 Most food delivery apps only offer those first three options. But DoorDash (NYSE: DASH) on Monday launched a pilot of on-demand drone delivery in Logan, Australia, with Alphabet (NASDAQ: GOOGL) subsidiary Wing, which has been operating in the Brisbane suburb since 2019.

It’s the first time the drone delivery provider has made its service available via a third-party app.

Customers can now place orders of convenience, grocery items, snacks and household essentials directly through the DoorDash app, picking the Drone Delivery option when prompted. Then, the app will display a satellite image of the customer’s residence and allow the user to drag and place a drop-off marker.

From there, a Wing drone will complete the delivery, typically in under 15 minutes. The drones will carry payloads a little under 2.5 pounds and travel at speeds approaching 70 mph, according to DoorDash. Orders will be tracked by GPS location, just like the app’s ground-based service.

The limited service, dubbed DoorDash Air, launched this week for select households in Logan, but the companies plan to expand availability in the coming months.

“While Wing has traditionally provided delivery services directly to residential and business customers, to further accelerate our technology development, we’ll be increasingly working with marketplaces and logistics partners to expand their delivery options, making fast drone delivery affordable and sustainable for them, and their customers,” said Simon Rossi, Wing Australia general manager.

Wing said in a blog post that it has been working for some time to integrate with a third-party app like DoorDash. Outside of the partnership, the company has also worked to move its operations closer to merchants and retailers in order to open up the service to marketplaces.

In Australia, for example, Wing built a drone delivery station on the roof of a local shopping center so deliveries can be made out of a central hub. It’s also been working on a store-to-door model in the U.S. that stages drones in small hangars at retail locations. Walmart, for instance, has stationed them on rooftops and in parking lots and other adjacent spaces.

By adding that layer of infrastructure, companies like Wing have found a way to make drone delivery more attractive to merchants because it allows them to reach their local customer base in just 15 minutes. That in turn makes the service attractive for consumers, which drives demand.

DoorDash in a news release pushed back against the idea that drones might take orders away from human couriers. It argued that drones will handle small, short-range orders — which are more likely to yield smaller tips — while freeing up couriers to handle more valuable orders.

The company also hinted that similar efforts are on the horizon, noting that “DoorDash sees automation as a means to develop the right platform solution to satisfy consumer demand across the globe, while improving efficiencies within the platform.”

Could a drone delivery service in the U.S. be part of that plan? Wing currently operates commercially in the Dallas-Fort Worth metropolitan area and is testing further services in Virginia. With DoorDash also operating heavily in the U.S., the groundwork is laid for an on-demand drone delivery pilot in one of those two states.

Already, DoorDash has piloted a robot delivery service with Starship Technologies, which has brought microwave-sized delivery robots to college campuses across the country. And last November, it introduced an automation arm, DoorDash Labs, which is building out its own robot.

For more coverage on drone delivery logistics, go to Freightwaves.com.