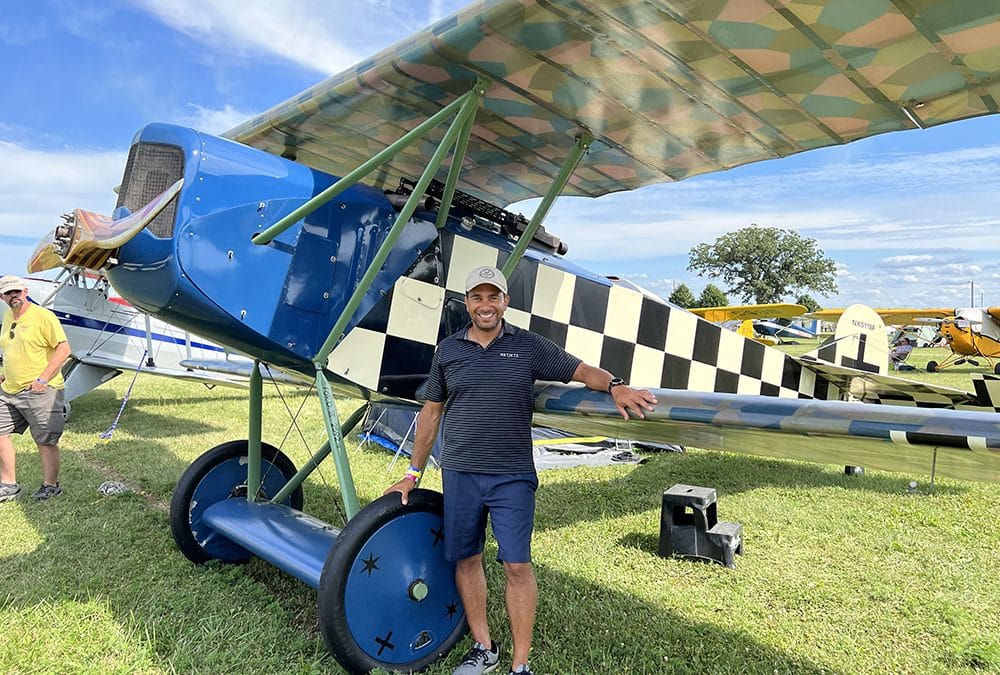 There is something special about bringing an aircraft to EAA AirVenture for the first time—especially when that aircraft is a one-of-a-kind replica of the Fokker D.VII.

The Fokker D.VII is a German biplane designed in 1918 by Reinhold Platz of the Fokker-Flugzeugwerke. During World War I, it was one of the most formidable German aircraft in the sky and a favorite of Germany’s Aces.

The Uniqueness of the Fokker

The replica aircraft at this year’s AirVenture is owned by Buck Toenges, a medical professional from Fort Wayne, Indiana. He became interested in aviation as a child—especially aircraft from World War I—after watching the movie, The Blue Max. A 1966 drama, the movie tells the story of a German foot soldier who aspired to become a fighter pilot and win Germany’s highest medal for valor, the Blue Max, for which he must shoot down 20 aircraft.

Toenges, who is not a pilot, started building the airplane in 1993 but wasn’t able to complete it by himself. Realizing the project was more than he anticipated, he reached out to the replica aviation community. The aircraft became a team effort as he called on experts in the replica aircraft world to help with the project. The search for help took him all over the world.

For example, a man from South Africa created the replica machine guns that sit atop the fuselage. Sometimes a lack of period-correct components meant making changes. The engine on the original 1918 design was made by Mercedes of BMW. One could not be found during the construction of the replica, so Toenges opted for a De Havilland Gypsy Queen model that came from an airplane that belonged to the Sri Lankan Air Force. The engine is inverted and gives the nose of the aircraft sort of a vintage automobile look.

The cockpit is wooden, and the instruments consist of a tachometer, altimeter and airspeed, plus a handful of engine gauges. [Photo: Meg Godlewski]

The aircraft was built using “modern materials,” such as 4130 chrome moly steel, but “vintage techniques.” The cockpit is wooden, and the instruments consist of a tachometer, altimeter and airspeed, plus a handful of engine gauges. The rudders are metal tubes with metal kick plates on the floor and there is a leather flying helmet jauntily displayed on the stick—this is an open cockpit design so eye and head protection is a must.

The paint scheme of the Fokker replica is perplexing by modern standards, when you consider that this was an airplane designed for aerial combat. Instead of earth and sky tones to make the aircraft blend in, the wings feature a lozenge pattern done in pinks, green, blue, white, and gray. The name “Julie” is emblazoned on the top wing, a tribute to Toenges’ wife, and the  fuselage has a black and white checkerboard design. The German cross is emblazoned on the tail—and there is a faux bullet hole painted on the vertical stabilizer.

The name “Julie” is emblazoned on the top wing, a tribute to Toenges’ wife, and the  fuselage has a black and white checkerboard design. [Photo: Meg Godlewski]

Toenges completed the structural restoration in 2009—then, because it is certified as Experimental, it had to be flown for 40 hours to prove its airworthiness. That had to happen before it was allowed to fly to AirVenture—and for that mission, Toenges turned to pilots Andrew King and Dewey Davenport.

Davenport, from Jamestown, Ohio, had the honor of flying the Fokker to AirVenture, and it was he who put FLYING Magazine in touch with Toenges by cell phone, as Toenges was not at the show.

“Buck isn’t a pilot,” Davenport explained with a smile and a shrug, “but he likes airplanes.”

According to Davenport, who owns a 1930 New Standard D-25 (the airplane known as a favorite of barnstormers during the early days of aviation), the Fokker “flies like an antique airplane. It is stiff on the ailerons and sometimes it feels like it doesn’t have enough rudder, and the yaw can be a bit weak.”

You “really” need to pay attention when you fly it, he notes.

You can see the Fokker D.VII parked in the Vintage Aircraft section on the AirVenture show grounds.