World’s Most Powerful Rocket Rolls Out Toward Launch Pad 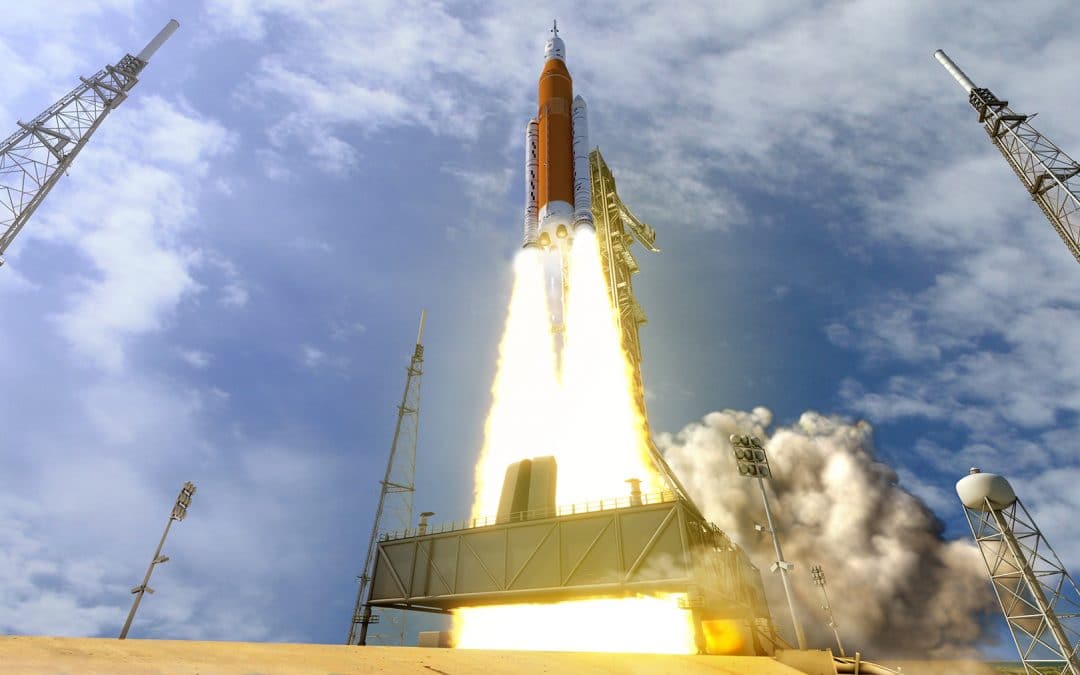 Towering 322 feet high and secured to a massive crawler-transporter the size of a baseball infield, Artemis I is expected to take 11 hours to reach the pad, located about 4 miles away.

The rollout marked a new phase of the historic Artemis program, which aims to put the first woman and person of color on the lunar surface. Later this year, Artemis I’s uncrewed Orion spacecraft is expected to blast off atop SLS—the world’s most powerful rocket. While Orion will circle the moon and return to splashdown in the Pacific off San Diego, SLS won’t be coming along for the ride. Instead, SLS will be jettisoned in Earth orbit before Orion continues its 1.3 million-mile journey.

NASA chief SLS engineer John Blevins told FLYING the SLS rocket is a critical part of NASA’s larger vision to reach beyond the moon—and eventually to travel to Mars. “Born out of that is this machine that we’ve designed and built—and designed the process to continue building—that enables that vision of the people to be achieved.”

Once Artemis I arrives at the launch pad, engineers will spend about two weeks preparing it for what’s called a “wet dress rehearsal,” a testing procedure when the SLS is fueled with supercooled liquid hydrogen and oxygen. NASA will connect and test SLS systems while it’s on the pad, making sure everything is working as expected. Finally, the entire behemoth will be drained of all fuel and rolled back to the VAB, for final troubleshooting and preparations for launch.

Artemis I will be an uncrewed space flight around the moon and back, ending with a splashdown on Earth. [Courtesy: NASA]

Like many NASA projects before it, the Artemis program has been beset by delays, including a recent pause blamed on a malfunctioning engine controller that had to be swapped out. “This is a unique process now because the vehicle is new,” NASA deputy associate administrator of exploration systems Tom Whitmeyer told reporters in February. We’re doing extra tests we won’t do on subsequent flights.”

Although Artemis I won’t be carrying astronauts, it will be hauling a lot of extra equipment designed to monitor all of its millions of parts and systems. “I think we’re probably the most instrumented vehicle ever to fly in the history of space,” Whitmeyer said. “We have thousands of measurements we’ll be taking on this test flight. …You’ll see some of that during the rollout.” All the added monitoring gear represents “a commitment on the part of the agency to get this type of information so we can fly the vehicle safely in the future and anchor our models,” he said.

Artemis I’s mission is to fly around the moon and return to Earth, but it represents so much more. The Artemis program was conceived to create a pathway toward long term exploration of the moon and Mars. If successful, Artemis could be laying the groundwork for humans to someday become an interplanetary species, establishing a colony and living on Mars.

Among those who will be paying close attention is retired NASA astronaut Eileen Collins, the first female Space Shuttle pilot and first female shuttle commander.

“To me, [the Artemis launch] is the event of the year, possibly—although the photos coming back from James Webb are right up there with it,” she told FLYING on Thursday, adding, “There’s an awful lot of exciting things taking place right in the space program this year.

“The number one reason we are doing the Artemis Program is because we eventually want to go to Mars and we’re using the moon as a testbed for the equipment that we’ll be taking to Mars,” Collins said. “We primarily need to be checking out the life support equipment for the astronauts’ habitat.”

Because traveling to Mars would take a minimum of six months to two years, developing reliable life support equipment for things such as air and water recycling is critical to success, she said.

“[The moon] is not identical to Mars, but it’s a really good place to be testing equipment close to the Earth, so if it fails, the astronauts can quickly come home.”

For those kinds of missions, the launch rocket needs to be more powerful to carry more supplies and materials. “We’re planning on going to stay,” Blevins said. “We’re not going for three-day visits this time.”

NASA astronaut Victor Glover, who was on site for Thursday’s rollout, has been selected for the Artemis Program. “I had the privilege, the fortune, of being part of the Crew-1 mission, which was to fly on a SpaceX Falcon 9 in the SpaceX Crew Dragon Resilience to the International Space Station,” Glover told FLYING. “To come back from a mission and then get right back engaged with something new, it’s special.”

Artemis is not just about the future, but it also serves as a reminder of past accomplishments, when NASA’s historic Apollo program successfully sent 12 men to the moon and brought them safely back to Earth. When the first Artemis astronauts explore the lunar surface sometime in the middle of this decade, it will be more than half a century after Apollo 17, when mission commander Eugene Cernan was the last Apollo astronaut to walk on the moon.

In 1972, Eugene Cernan was the last Apollo astronaut to walk or – in the case of this Lunar Roving Vehicle – drive on the moon. [Courtesy: NASA]

SLS Is a Single-Use Rocket

Unlike SpaceX’s smaller reusable rockets, SLS can only be used once, which helps explain why each Artemis mission is projected to cost a little more than $4 billion. By 2020, the entire SLS program to design, develop, build and test the rocket system had spent an estimated $17 billion.

SLS was born in 2010, when Congress passed a law calling on NASA to launch heavy payloads into space as a replacement for the Space Shuttle. By 2014, construction of the engine section was underway. The first SLS was test fired in 2020 and finally, the SLS was stacked inside the VAB with the other Artemis I components last year.

SLS produces 8.8 million pounds of maximum thrust, 15 percent more than Apollo’s Saturn V rocket.Artemis I’s SLS can carry a payload into deep space weighing up to 83,700 pounds. The SLS’s 212-foot-tall core stage is built by the Boeing Company at a NASA facility in New Orleans. The core stage can hold 730,000 gallons of fuel for its four RS-25 engines. It was test fired at NASA’s Stennis Space Center in Mississippi. SLS has two solid rocket boosters mounted on each side of the core. Built by Northrop Grumman, they’re derived from solid rocket boosters that were designed for NASA’s Space Shuttle program.SLS is designed to evolve for various journeys beyond the moon, including Mars, and robotic missions to Saturn and Jupiter.

An artist’s rendition of Artemis astronauts on the lunar surface.  [Courtesy: NASA]

NASA hasn’t yet announced an official launch date for Artemis I. But given expectations for testing and ideal launch windows, liftoff could take place as soon as this summer. Officials say they hope the gap between wet dress rehearsal and launch won’t be too long, but they want to fully analyze test results before setting a launch date.

Collins told FLYING she plans to be at this year’s launch. “I hesitate to use the word ‘excited,’ but I would say that I’m anxiously awaiting the flight and the results and I’m optimistic that they’re going to have a good mission.”

Artemis astronauts have already been chosen for the program—but there have been no specific astronaut assignments yet for the first crewed mission, Artemis II, which will circle the moon, but not land. The historic return to the moon’s surface is planned for Artemis III, which could take place as soon as 2026.

The post World’s Most Powerful Rocket Rolls Out Toward Launch Pad appeared first on FLYING Magazine.